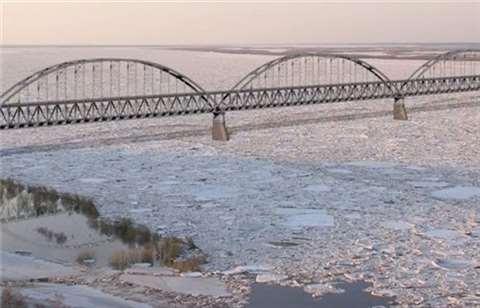 Artist’s impression of the proposed bridge on the Lena river

Construction is about to start on a road and bridge in one of the coldest inhabited regions on Earth.

The Russian state and defence corporation, Rostec, together with VIS Group – one of the country’s largest infrastructure holdings – has been given the green light to build the 3.1km bridge across the Lena river in the Russian Yakutia Republic in Siberia.

Presently, Yakutsk – the capital of Russia’s diamond mining industry – remains the only one of the 100 largest cities in Russia that does not have year-round ground transport links with access to the federal road network.

According to Aisen Nikolaev, head of the Yakutia Republic, the new bridge will connect the region’s largest transport highways and allow almost three times the volume of freight traffic in the region.

Work is scheduled to start this year, with completion expected by 2025. The majority of construction activity will take place in severe climatic conditions, with the bridge having to be built on permafrost.

The challenging project was first proposed in the 1980s, but its implementation was repeatedly delayed, due to the high cost and significant engineering challenges, as well as Vladimir Putin’s government identifying higher priority projects – such as the Kerch bridge.

The total cost of construction work is estimated to be approximately RUB83 billion (€1.2 billion), with between RUB54 billion and RUB73 billion (€775 million and €1 billion) to come from Russia’s state budget and the remainder from private investment.

The scope of the project will include the two-laned cable-stayed bridge, with three pillars built on the river, plus some 11km of access roads.

Reports say the Chinese China Railway Construction Corporation (CRCC) may be involved in the bridge’s construction.