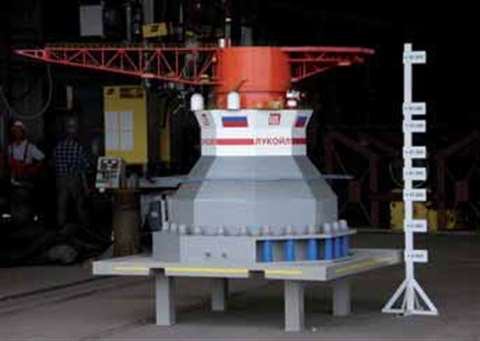 A model of the complete FOIROT when fully assembled on site. According to LUKOIL it is the first offshore ice resistant oil terminal in the world for year round operation

Russian oil company LUKOIL is increasing the capacity of its Varandey Oil Export Terminal (VOET) up to 12 million tonnes a year. The terminal is in the north of the Nenets Autonomous District on the Barents Sea coast. Via two underwater pipelines the oil will be pumped from storage tanks on land to the semi permanent transfer terminal about 22 km offshore.

The FOIROT terminal has to be ice resistant to guarantee year-round operation in the severe Arctic environment. The harsh weather conditions also played a major role in the decision to pre-fabricate the terminal at the LUKOIL-Kaliningradmorneft steel fabrication yard in Kaliningrad.

According to LUKOIL, the terminal is the first offshore ice resistant oil terminal in the world for year round operation. To guarantee this capability, Russian engineers designed the FOIROT, a fixed offshore ice-resistant offloading terminal. Basically FOIROT consists of two structures. An octagonal steel structure, measuring about 53 x 53 x 45 m, forms the base of the terminal. An accommodation module is on top. The weight of the complete base structure is 10,200 tonnes. The second structure, the mooring cargo handling system (MCHS), consists of a central upperworks with a horizontal mast and a helicopter platform. The oddly shaped structure, measuring about 100 x 20 x 15 m and weighing 1,300 tonnes, will be lifted on top of the base structure once that has been installed on the sea bed.

LUKOIL started preparations on the project in 2005. Mammoet was already consulted during the design phase of the project. The ground bearing restrictions of the Kaliningrad yard, initially 6 tonnes per square metre, required major attention. When the trailers had to be positioned underneath the structure the temporary supports had to be removed from underneath. The ground pressure would then rise to an unacceptably high level. In addition, the load out quay itself would also not allow a load out of this magnitude.

Initially Mammoet advised on how to increase capacity to 8 tonnes per square metre. But once the design weight of the FOIROT started rising to 14,000 tonnes, LUKOIL contracted Mammoet's engineering department to advise on structural improvements of the load out quay. Based on

Mammoet's study, LUKOIL upgraded its facilities to allow 10 tonnes per square metre. Meanwhile the design weight of the structure was back to around 10,000 tonnes.

Ground bearing pressure was not only an issue on land. Due to the relatively low draft at the load out quay, the barge had to be ballasted to the ground. But, even more than on land, restrictions also applied to the ground bearing pressure of the bottom of the harbour. Only 2 tonnes per square metre would be allowed. This required a careful deballasting scheme to be calculated and applied.

Mammoet contracted the complete load out, including the engineering of both land and port related issues, the mooring arrangements and ballasting of one of the barges, and the 432 axle lines of self propelled modular transporter (SPMT) to be used. The barges were to be provided by the customer.

All equipment to be used on the load out would be shipped straight from Mammoet's Heavy Lift Terminal in Schiedam, the Netherlands, to LUKOIL's Kaliningrad yard in Russia. Due to the large number of axle lines required, in combination with the busy work schedule of the SPMTs around the world, first Mammoet had to mobilize its transporters to the Netherlands. They arrived from different worldwide locations from as far as Australia, Indonesia, Saudi Arabia and Malaysia. In addition, SPMTs were added from around Europe.

On arrival of the equipment in Russia, the SPMTs were prepared for the first load out: the 10,200 tonnes FOIROT. Mammoet engineers had made detailed calculations, in consultation with LUKOIL, resulting in a detailed transport plan and drawings. The transporters, consisting both of Scheuerle and Kamag SPMT, were configured to 10 rows and two groups; a front and end one. Following that the SPMTs were positioned underneath and in between the supports: two rows at both the left and right outside and two badges of three rows underneath the centre of the structure. According to the engineered plan, 80 temporary supports were on the transporters to guarantee correct load distribution.

In the meantime the barge AMT Trader was carefully positioned in front of the load out quay. Due to the short distance to be covered from land to barge and the tight fit of the transporters in between the supports, space to manoeuvre was almost zero. Subsequently the barge had to be exactly in line. This was further complicated by the fact that the shallow draft in the port required the barge to be ballasted and grounded on a previously installed sand bed. In this way the deck of the barge was brought exactly in line with the quay.

According to plan, the load-out operation started at 3 a.m. Sunday, 1 July. The 10,200 tonne FOIROT was lifted free from its temporary supports using the hydraulic suspension of the SPMTs. Step-by-step the fortress-like structure rolled on to the barge. To prevent the harbour bottom ground from overloading, careful coordination was required between the ballasting master of the barge, the Mammoet load out master and SPMT operators.

Only short distances could be covered to allow the ballasting to be adapted. In this way the non-stop operation, including driving the SPMTs off once loading was performed and the FOIROT was lowered on to the barge supports, took till 8 p.m. After sea fastening, the barge was re-floated and replaced by another barge to load the MCHS.

By Wednesday the second load out was performed. The length and odd shape of the of the 1,300 tonne MCHS, in combination with the relatively compact loading area and the high centre of gravity, made it a challenging operation. In addition, 1.60 m-high temporary supports were required on the transporters to allow the four rows, configured to 1 x 10, 2 x 18 and 1 x 8 lines, to take over their load.

Following that, the multi directional steering of the SPMTs made easy work of manoeuvring the long load in line with and on to, the barge. In this case Mammoet performed the actual ballasting of the barge using its computerized ballasting system.

On arrival at the installation site in the Barents Sea, the FOIROT will be launched and secured to the 17 m deep sea bed by 24 piles. Following that, the MCHS will be lifted on top. Once the pipelines are connected, the upgraded VOET is expected to be commissioned in the fourth quarter of 2007.