SAEclimber has implemented new safety improvements to its products that go beyond European standards, following the UK HSE’s safety alert in May concerning mast climbers. 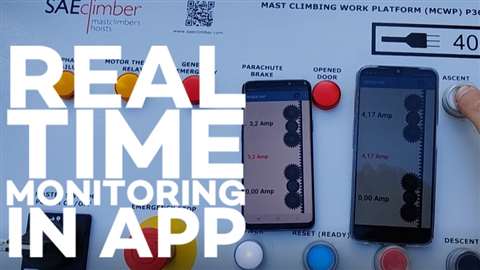 The Health and Safety Executive’s (HSE) BSCD1-2022 alert stated, ‘Platforms could fall from height where mechanical faults in drive units go undetected. If not rectified quickly, the fault could cause serious injury, or even death.’

Now, SAEclimber has confirmed features on its P40 mast climber exceed European EN-1495 standard requirements, including a new app-based device. In addition, the company said, through a range of tests and video evidence sent to HSE, showed that its P40 unit has two motors with centrifugal brakes and a magnetothermal relay that detects failures in any one of the motors.

It does this by detecting over current, rather than temperature. The company said that the evidence clearly shows that the drive unit stops when the difference of power consumption between both motors is higher than 25%.

After having presented the report to the HSE, SAEclimber decided to also go beyond the European standard by adding extra safety solutions, including an amperimetric card that can be monitored using an app, as well a new inductive relay.