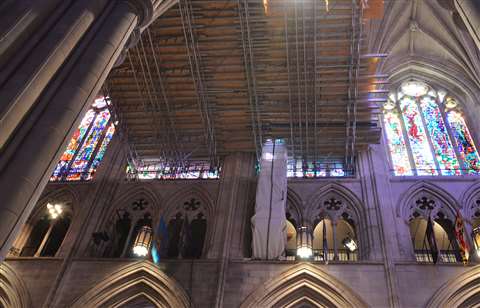 Safway Services has been awarded a 2015 Craftsmanship Award by the Washington Building Congress (WBC) for creative solutions to access challenges associated with repairs on the National Cathedral in Washington, D.C.

“While the work Safway is doing is impressive (in light of the complex structure), even more remarkable is their ability to perform scaffold erection and dismantling activities, constantly surrounded by the sensitive, significant and sometimes brittle historic ‘fabric’ of the Washington National Cathedral, as well as continuously working in a manner that keeps the Cathedral open to its daily … activities.”

Burger added, “With these important elements in mind, Safway’s careful use of protection materials they put in place every night and remove every morning, has mitigated the potential for damage." Burger also noted that Safway was able to keep pace even when work went faster than planned.

Safway is the access provider for the multi-year project, aimed at repairing 2011 earthquake damage to the national landmark. Safway received the Craftsmanship Award based on its use of creative solutions that allowed the cathedral to remain open for worship, tours and other daily activities throughout the two-year interior phase of the project. Safway provided access to all of the masonry on the interior phase of the soaring church, as well as to the exterior’s flying buttresses and other structures, where work continues.

Steve Quaerna, a sales representative at Safway’s Laurel, MD branch, explained that his crew used a HAKI Truss product, which allows hand assembly of long, strong trusses, to span as much as 45 feet across traditional scaffolding erected on the clerestory balconies, which are 2-foot-wide ledges above the main areas of the cathedral – the nave, great choir, apse and north and south transepts. The trusses were used to create platforms for masonry repairs more than 80 feet above the floor, while pews and other public areas below remained in use. Rolling scaffolds were erected on the elevated platforms to provide access to all areas of the curved ceiling and stained glass windows.

An even more difficult challenge was to provide access to the area above the “crossing” of the church, where the nave and great choir intersect the transepts. There was no ledge on which to rest anything, and the cathedral’s leadership insisted that no support equipment be placed on the church floor in this area. The answer came from another non-traditional Safway product, QuikDeck. A modular, suspended access system, QuikDeck is often used to reach the underside of large, high structures such as bridges. In this case, 1.25-inch wire rope cables were strung through existing holes in the cathedral’s vaulted ceiling, attached to structural supporting Systems Scaffolding towers in an attic above. The QuikDeck was suspended from these towers via the cables. QuikDeck’s segments can be cantilevered, and such areas were used as working surfaces at the perimeters of the platform facing the nave, great choir and transept areas.

“It’s such an honor for Safway to be entrusted to provide access to yet another important architectural landmark,” Quaerna said. “To receive this Craftsmanship Award makes it all the more satisfying."

Interior work was completed in late February with no safety-related incidents. The National Cathedral, which first opened for services in 1912, and was officially completed in 1990, has been the site of numerous momentous events in United States history, including funerals and memorial services for several U.S. presidents. It was damaged in a 5.8 magnitude earthquake on Aug. 23, 2011.

Safway was honored in the Scaffolding and Rigging category and received the award at a gala on March 20. The Washington Building Congress has bestowed the Craftsmanship Awards every year since 1956.