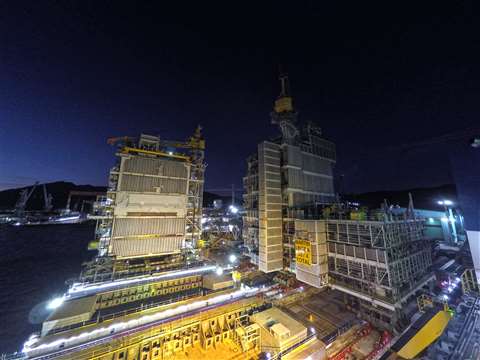 Each module weighed around 10,000 tonnes

They were the utility and process modules and ALE-Offshore Services performed both the weighing and load-out operations. The utility module was 9,580 tonnes and the process module weighed 10,850 tonnes. After weighing on a synchronised system the modules were loaded out onto the same vessel in separate skidding operations over two months.

Commenting on the job, Edwin Blosser, ALE project engineer, said, “In consideration of the sheer size and scale of the piece, to perform the load-out was no mean feat. As the modules had a high centre of gravity, it was extremely challenging to load them out onto the same vessel and control the vessel’s stability. We utilised a computerised skidding system to overcome this, as well as quay jacks to monitor the load.”