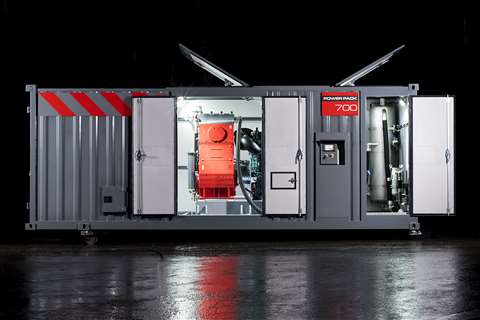 As well as motors and pumps, the standard Aqua Power Pack container comes with a built-in workbench with a vice, allowing for onsite maintenance. Aquajet says the pack is also a storage space for spare parts, accessories and tools.

Both standard and Ecosilence packs measure 7m by 2.4m by 2.6m. The containers have insulated walls and double doors, as well as seals on all doors and hatches, and the Ecosilence promises noise levels less than half that of competitive high-pressure units.

Aquajet says that, with an average of 57.5dB, the Ecosilence unit is ideal for use in urban areas that have high noise restrictions. In addition, the pack boasts improved fuel consumption of as much as 10% compared to alternative high-pressure units.

The Ecosilence can also be equipped with a roll-off frame for simplified on/off truck loading and transport and is available in two sizes – the Power Pack 400 and 700 – operating at as high as 18,700 psi.

Aquajet Systems managing director Roger Simonsson said, “The Aqua Packs are designed to accommodate a wide range of projects, whether they require a standard pack, a compact footprint or a quieter alternative.”