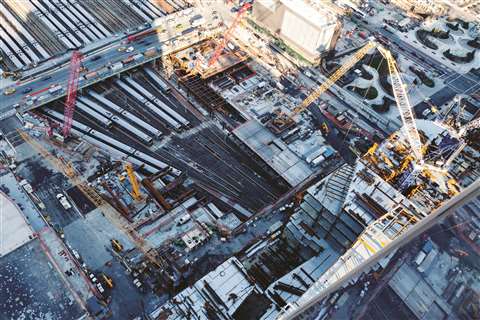 The challenge for Hudson Yards construction teams was to build a 61,000 m2 platform over a busy rail yard

The Wikipedia definition of a mega project is that it is a temporary endeavour characterised by large investment commitment.

The figure attached to that commitment, according to both Wikipedia and the US Federal Highway Administration, is $1 billion. To be honest, they may both be a tad out of touch.

Given there are projects currently underway valued at well in excess of $50 billion, a $1 billion project may need to be re-categorised as ‘baby mega’ at best.

As you will see, the projects in this article are not so much at the the higher end of the mega scale as completely off the scale.

So, in no particular order… 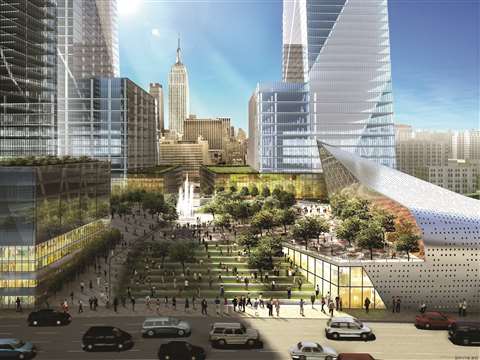 An artist’s impression of the Hudson Yards redevelopment project in Manhattan, New York, as it is set to look in 2024

At the last count, the redevelopment of a 113 m2 area of Manhattan’s West Side, was set to include around 120,000 tonnes of steel and 16 skyscrapers, sat on a concrete platform covering well over 61,000 m2.

The estimated cost of the project may be a hefty $20 billion, but it is set to create some 23,000 construction jobs. Moreover, when completed, the Hudson Yards redevelopment is expected to generate almost $19 billion a year for the city of New York – a figure exceeding the GDP of Iceland.

As impressive as that is, there are other huge city developments and redevelopments around the world. This one is exceptional because it will basically be suspended above one of the world’s busiest rail yards, incorporating 30 rail tracks.

The basis of the development is a pair of concrete platforms on which the Hudson Yard buildings are now being built; this platforms – one each for the eastern and western halves of the rail yard. 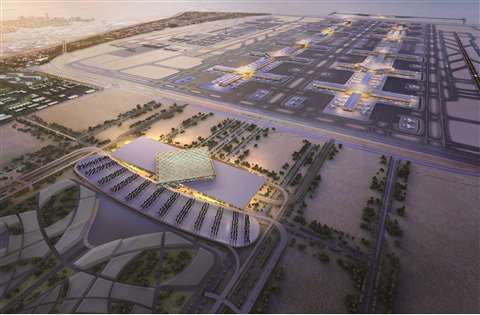 In those areas of the yard that could be built on, the engineering team strategically placed foundations to support the massive structure above. The 35,000 tonne platform covering the eastern yard, for example, is supported by 300 foundation caissons, drilled between the rail tracks. The engineering feat is made all the more impressive by the fact that rail and other tunnels also run beneath the yard.

To make matters worse, at the throat of the yard, where the tracks converge, there was simply no room to drill foundations, so here, the construction team had to place steel trusses to form a bridge that would take the weight of the platform.

From this base, skyscrapers, set to reach heights of up to 395 m, are now rising above the eastern half of the yard.

This monumental and ambitious project broke ground in December 2012, and is scheduled for completion in 2024.

The new Al Maktoum International Airport in Dubai – or Dubai World Central (DWC) – opened its doors in October 2013. It was a big project that became a mega project when construction firm Al Jaber LEGT Engineering and Contracting (ALEC) was asked to double the size of the terminal building.

In fact, the airport is a mega project within a mega project, located as it is at the heart of the Dubai South city development, set to include special zones for offices and retail, residences as well as extensive sport and leisure developments.

Ongoing expansion plans for the airport will see it become the busiest in the world by 2050, with a capacity of more than 220 million passengers and 14.5 million tonnes of cargo per year. The current masterplan carries a budget of almost $33 billion.

The project designers had to take into account a vast number of factors, including the fact that passenger numbers could potentially climb to over 260 million by 2040, then as high as 309 million by 2050.

For this reason, the design had to be both scalable and modular, allowing it to adapt quickly to the rising traffic and potential changes in the business environment.

The first-phase expansion of the airport is set to include two sub-phases, the first of which comprises the construction of the new terminal facilities, concourses, satellite terminals and facilities. 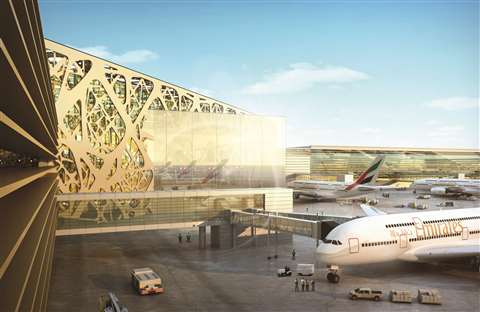 The second sub-phase will both expand original runways and construct new ones, including the construction of two parallel 4.5 km-long runways with enough distance between them to enable simultaneous take-offs and landings.

At this point, the terminal will have an area of 165,000 m2, offering a capacity of 35 million passengers a year.

A sense of the mammoth scale of the airport comes with the fact that 200 wide-bodied aircraft will be able to simultaneously sit on contact stands.

Following phase two construction work, the airport will have five large runways, an additional terminal, and two new concourses, each with a passenger handling capacity of 65 million a year.

Along with the airport’s expansion, a total of 12 new railway tracks and 10 stations will be built, to connect the terminals and concourses.

The first phase of expansion (to 120 passengers a year) is expected to take eight to nine years to complete. 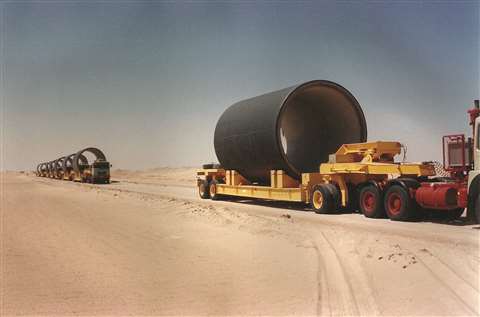 For phase 1 of Libya’s great water relocation project, some 85 million m3 was excavated and 1,200 km of pipe laid

This feat of engineering – first mooted in 1983 – is the world’s biggest irrigation project to date.

A large amount of Libya’s water supply came in the past from desalination plants on the country’s coast.

The problem was that the operation was costly, and becoming less effective because, in the case of the plant in Tripoli, at least, the equipment was said to be becoming contaminated.

The plan for the Great Man-Made River Project (GMR project) was to carry water pulled from aquifers in the Sahara desert to the heavily populated northern coastal belt.

Currently, the system extracts 2.5 million m3, but the current divisions in the country have left further work on the project in doubt.

The 600 m-deep aquifer in the Sirte basin is estimated to hold more than 10,000 km2 of water, while the 450,000 km2 Murzuk basin, south of Jabal Fezzan, is estimated to hold 4,800 km2. Still more water lies in the Hamadah and Kufrah basins, which extend from the Qargaf Arch and Jabal Sawda to the coast. 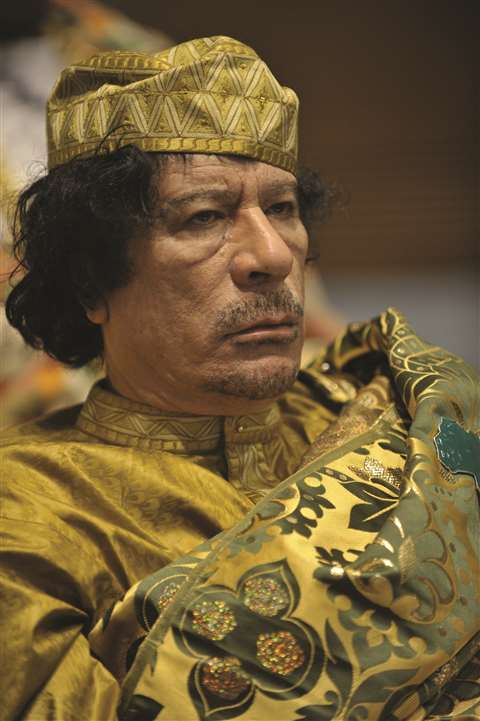 The Libyan government claims there is enough underground water to last for over 4,600 years, although some independent estimates suggest that, at the current rate of extraction, it could be spent in less than 100 years.

In the first phase of development, a pipeline 1,200 km in length was laid, using 2.5 million tonnes of cement, 13 million tonnes of aggregate and 2 million km of wire. In order to lay the pipe, the excavation of some 85 million m3 of earth was also required. At this point – and at a cost of around $14 billion – the project was able to extract over 1 million m3 of water per day.

In phase two of the project’s pipeline brings another 1 million m3 of water daily from the Fezzan region to Tripoli, as well as aiding irrigation on the Jeffara Plain, on the western coast.

In phase three, which was completed in 2009, a further 700 km of pipes were added, along with new pumping stations, allowing the extraction of a further 1.68 million m3 of water per day.

The design phases of the project feature extensive work on routing and profiling for the pipelines, consideration of hydraulics, pumping stations, mechanical and electrical systems, maintenance and corrosion, plus the construction of reservoirs and other structures. 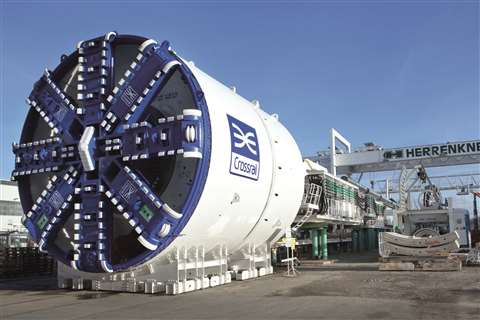 One of Herrenknecht’s EPB Shields, ready to be transported to the Crossrail project in London

Incredibly, the financing of the project, up to this point, was primarily undertaken solely by the Libyan government of Colonel Gadaffi – largely using profits from the country’s rich oil deposits.

Unfortunately, Nato air strikes in 2011 seriously damaged the project, with a pipe-making facility receiving a direct missile strike. The extraction of water was reduced to the 2.5 million m3 at which it currently stands.

Some of the firms that have had involvement in this groundbreaking engineering project include the main contractor on phase one, Dong Ah, along with sub-contractors, Enka Construction and Al Nah.

The preliminary engineering and design contractor for phase III is the consortium of Nippon Koei and Halcrow, while the consortium of Frankenthal and KSB undertook the construction and technical support on the pumping station, and SNC-Lavalin was responsible for the operation and maintenance of the pipe production plant.

Currently the largest construction project in Europe, Crossrail comprises a rail line stretching over 100 km, passing through 40 stations (10 of them new) and travelling via 42 km of new tunnels, built largely under the busy streets of central London.

Approved in 2007, the initiative is set to increase the city’s rail capacity by 10%, supporting regeneration and cutting journey times.

Construction work began in earnest in 2009, following the awarding of a contract to Bechtel for the delivery of the tunnel section of the project, and the construction of eight subsurface stations.

Completion of the tunnels was a major highlight of 2015, as the last of eight Herrenknecht TBMs (tunnel boring machines) broke through in May of that year. At that point some 21 km of twin bore tunnels had been threaded through the complex and cluttered ground beneath the UK’s capital.

Each of these machines was 150 m long, weighed 1,000 tonnes and moved below ground with 20-person ‘tunnel gangs’ on board, working in shifts around the clock for three years.

The last TBM to break through, named Victoria, completed one of two parallel 8.3 km bores, from the east of the city to Farringdon Station in central London; this represented the longest single drive of the project. At the time, there were six 7.1 m-diameter EPB (earth pressure balance) machines working on the project, which also featured two slurry-type Mixshield TBMs for undertaking the complex job of tunnelling under the River Thames.

During the course of the tunnelling, over 3 million tonnes of excavated material was removed and shipped to Wallasea Island in Essex, where it was used to create a new nature reserve. 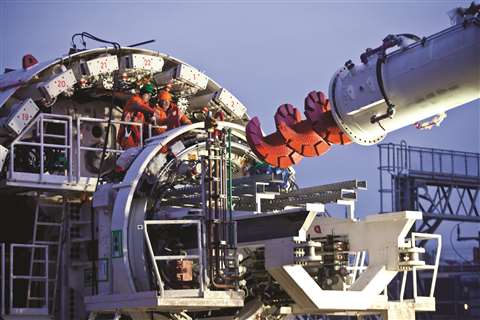 Engineers check the installation of the cutterhead on the tunnel boring machine, ahead of digging a Crossrail tunnel

Today, work is ongoing on station caverns, primarily with spray concrete methods, and fitting out for both stations and rail. Trains are due to start using the lines from the end of 2018.

Ultimately, what is now known as Crossrail 1 – with a total cost of around $18.5 billion – will host some 200 million passengers a year.

In March 2016, the Crossrail 2 project received approval from the UK government and was granted funding of around $100 million for planning.

Crossrail 2 will both add to the Crossrail 1 network within London and extend rail links out to Hertfordshire to the north-east of the city, and Surrey to the south-west.

This project, currently valued at around $37.5 billion, is now well into the development phase, with work expected to begin in the early 2020s.

Early predictions are that over 200 construction contracts will go out to tender for Crossrail 2, with the creation of up to 60,000 jobs during the construction period.