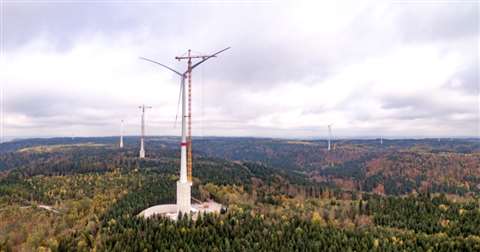 German firm Max Bögl Wind is claiming a world record for the world’s tallest onshore wind turbine, which it has built in the town of Gaildorf near Stuttgart, Germany.

The company also claimed that the turbine was part of a “wholly-unique power plant concept – the water battery”.

It said the height record had been achieved in part as a result of the natural water reservoir built into the turbine. The water battery is said to be the first time ever that power generation from renewable energy is being combined with a modern pumped-storage power plant.

This new storage concept uses the foundation of the wind turbine as a water reservoir, which results in a 40m increase in the height of the turbine. This is said to be hugely beneficial since each additional metre of hub height added to a wind turbine increases the annual energy yield by 0.5 to 1%.

The turbine is part of a wind farm that consists of four wind turbines with hub heights ranging from 155 to 178m. Equipped with 3.4MW generators from GE (General Electric), they will begin supplying clean energy to the German power grid in the spring of 2018.

It is estimated that more than 10 gigawatt hours will be generated per year, which is enough electricity to power 2,500 four-person households.

The German federal government’s goal is to increase the share of renewable energy sources for power generation to 50%. It currently stands at 38%.

The foundations of the wind turbine towers in Gaildorf are the water reservoirs with a storage capacity of 70MWh. A penstock connects them with a hydroelectric power station and its lower reservoir located 200m deeper into the valley.

The water battery – which was also referred to as natural power storage in the Gaildorf pilot project – can store surplus power from the grid and release it when necessary. It acts as a short-term storage facility and helps to maintain grid stability while guaranteeing a continuous, uninterrupted supply of power, said Bögl.