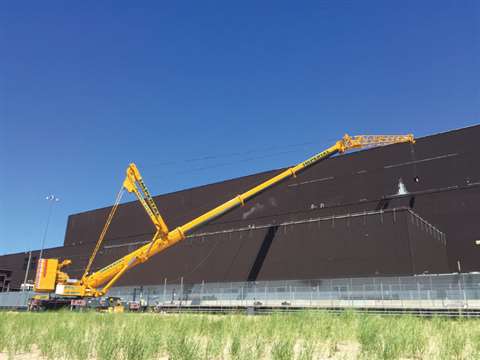 Imperial Power Services got creative when they couldn’t fit their crane onto the premises of a nuclear power plant. John Skelly reports

The Donald C Cook Nuclear Generating Station is a 263-hectare, two-reactor plant located just north of the city of Bridgman, Michigan, USA. Employing nearly 1,000 people, facility administrators noticed they might not have the best setup for shuttling workers to and from the break area for their daily lunch, among other things. Walking to and from the break room was taking up an inordinate amount of their people’s time, so they decided to conduct a cost-benefit analysis to determine if a new space was worth adding on to the plant.

It turned out that adding a new break room to the roof of one of their existing structures would increase efficiency enough to justify the cost, so they contracted Rick Bohne, Jr, Rick Bohne, Sr and Don Zych of Imperial Power Services of Bridgeview, Illinois, USA.

Imperial Power Services conducts turnkey lifting and rigging operations all over the Midwest by providing the crane, operator, rigging crew and construction management team to a site. Bohne, Jr and company made the 100 mile trip around Lake Michigan to the power plant with a 500 tonne Liebherr LTM 1500-8.1 they purchased in 2011.

“We would have had to set it up, set the steel on the south end, take it down, move it to the north side of the building, set it up and then set that steel,” said Bohne, Jr. “That would have taken a lot more time, cost more money and blocked half the plant in the process.”

Scratching their heads a bit, Zych halfheartedly suggested they set up the crane on the beach of Lake Michigan, but it was casually laughed off. Then he suggested it again.

“We decided to explore it,” said Bohne, Jr. “We talked to some people and gained an understanding for the hazards and limitations, then we put a plan together and it became a reality. Now we’re sitting dead-center in the middle of the building and the crane can fit in one spot the whole time. We never have to move it, it can reach everything and the people who work in the plant have full access to their area.”

Bohne, Sr devised a 213 m roadway out to the beach, complete with four bridges to mitigate ground bearing pressure and get around a washout and some underground piping. Imperial then drove 96 tonnes across access mats, ledge mats and wooden mats made from Douglas fir.

“Building the crane mats was quite the undertaking,” said Bohne, Jr. “There was an environmental component to the job because the crane is so close to Lake Michigan. It’s sitting on a 12 by 18 m collapsible steel containment beam that catches any leakage, preventing it from running into the lake.”

The 500 tonne Liebherr LTM 1500-8.1 all terrain crane was rigged with 47.2 m of main boom, 14 m of fixed jib at a 20 degree offset and the guyed attachment, which ups the capacity of the boom by increasing tension and stiffening it. From its position on the beach the crane lifted the steel frame and 16 modular trailer units, measuring 4 by 14 m each, which together made up the new break room.

Because the crane was 2.4 m lower than the main elevation of the plant, communication between the crane operator and the workers on the roof was a bit complicated. Imperial Power Services reached out to McKee Hardline Communications Systems to lend them a hand, or an ear in this case.

McKee helped Imperial equip the crane with a speaker box in the cab so the operator could communicate hands-free. Next they drew a yellow hardline across the beach, over the fence, into the plant and up to the roof that connected to a handheld phone which the workers on the roof could use to respond to the operator. Additionally, they inserted a camera into the handheld phone and a monitor in the cab, providing even more orientation to the operator.

“We told them to send us whatever they had and we’d try it out,” said Bohne, Jr. “They were overnighting us stuff that we had talked about less than 24 hours prior.”

With McKee’s help Imperial was able to complete the project in the middle of September, on time and incident free. Bohne, Jr. said it was one the coolest and most unique jobs he’s ever been a part of throughout his 14-year tenure with Imperial Power Services.

“It’s certainly one of those once-in-a-career jobs,” said Bohne. But he admitted there was someone else who probably enjoyed it even more. “You’re literally 40 to 50 feet from where the waves roll up, the crane operator probably has the best gig in town,” he said.