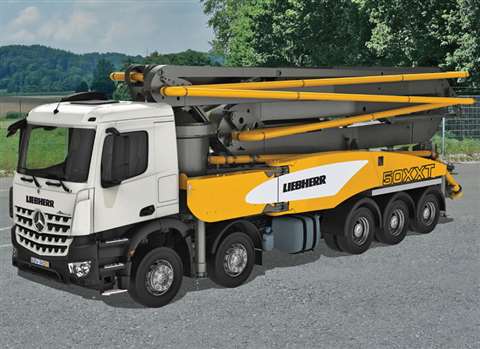 Manufacturers of concrete pumps and concrete mixing plants are always trying to find new ways of improving their machines.

Concrete pumps, for example, are getting lighter and more space-efficient, while concrete mixing plants are producing more and more cement per hour.

New products and updates to current machines have been many over the past 12 months, with companies desperate not to get left behind.

Liebherr has launched its new 50 M5 XXT truck-mounted concrete pump. The vehicle, positioned in the 50m class, includes many new innovations, according to the company. The development is focused in particular on optimising the unladen weight and the dimensions.

The new 50 M5 XXT extends the range of truck-mounted concrete pumps from Liebherr. The boom with five-way multi-folding is said to be extremely easy to operate with its “perfect kinematics”. The alternating pipework close to the boom is said to ensure uniform movements over the construction site.

With a vertical reach of 49.1m and a horizontal reach of 44.4m, the compactly constructed truck-mounted concrete pump claims impressive working ranges.

Another feature of the 50 M5 XXT is the newly-developed boom pedestal. The company said that despite considerable weight reduction, the stability was increased even further. It said the proprietary components play a crucial role in this, such as the slewing ring and the slewing drive, for example.

The 50 M5 XXT is optionally offered with four different pump units. This enables outputs of 138m³ to 167m³ per hour. Two of these variants are long-stroke versions with a conveyance stroke of 2,400mm, which Liebherr said were particularly smooth and efficient.

Depending on the chassis, the total length of the new Liebherr truck-mounted concrete pump is around 12m in the transport position. The new boom is compact and has virtually no projection, claimed Liebherr. It said this guaranteed safe driving properties and good handling on the construction site.

In Europe, the Liebherr 50 M5 XXT is mounted on standard, five-axle chassis. The unladen weight is significantly below 40 tonnes. Therefore, there is sufficient spare weight for accessories.

For markets without an axle weight restriction, the pump can also be mounted on a four-axle chassis. In this variant, the unladen weight is below 38 tonnes.

Cifa, meanwhile, said it continued to implement the product strategy that emphasised diversification of the range based on its three lines – Carbotech, Steeltech and Classic.

The K45H is the best-seller in the range and was recently the focus of an advancement that allowed the weight margin to be increased to 32 tonnes on four axles. The K45H has a 45m arm, and five sections including the last two in composite material.

The K45H mounts the new 1608EC pumping unit, a unit that claims to combine performance and light weight, which has a closed circuit with a maximum capacity of 160m³/h, 80 bar maximum pressure and electronic management.

The K53H and K60H can be fitted on four and five axle vehicle chassis. The solution on five axles even complies with the weight limits in the most restrictive countries such as Germany.

In the company’s Steeltech range, the K36L was completely redesigned to comply with the weight limits for three axle chassis at 26 tonnes.

It mounts a five-section arm in steel with Z folding, and can be personalised by the customer with a vast selection of equipment.

Finally, in its Classic range, the K40C has a 40m long arm, five sections with RZ folding and an open circuit pumping unit with a maximum capacity of 160m³/h and 70 bar maximum pressure on the concrete.

The company said that this was a pump designed to be reliable and simple without sacrificing any major features.

The Energya range (hybrid plug-in mixer truck) was on display at the recent Bauma show in Munich, Germany, as well as the model E9 HD range, and the model HD 15.

Putzmeister said the most important advances on its tried and proven truck mixer concrete pumps – the PUMI 25-4 and the 28-4 New Generation – included the stepless support, the four-arm distributing boom, the new S-pump, the Ergonic 2.0 control and technologies for reduced operating costs, and exhaust and noise emissions.

The stepless support, which offers incredible flexibility on constricted sites in particular, is new, as is the four-arm distributing boom with optimised slip characteristics and maximum working range.

Putzmeister said that easier and safer operation was thanks to the extensive lighting concept and the new computer-assisted Ergonic 2.0 control. The newly-developed S-piston pump with large hopper, good accessibility and optimised performance data was developed specifically for PUMI applications.

In order to counteract wear, Putzmeister has further refined the design of its machines. The torsion-resistant integral frame and shape-optimised mixer drum are said to ensure a consistent axle load distribution, preserving the machine over the long term and keeping operating costs low.

The new PUMIs are said to be proving to be eco-friendly and economic thanks to lower operating fluid consumption and reduced exhaust and noise emissions.

German company Klein has a range of products on the market, including a weight-optimised truck-mounted concrete pump with a 37m boom.

The company said the weight reduction to less than 22.6 tonnes in the 37m class was “not thought possible”. It said the main reason for the significant weight reduction was the modified linkage of the front and rear outriggers.

Another feature of the new KBZ 37-4 concrete pump is a common pivot point which absorbs the load torque of the support legs. The axle loads on the pump have also been reduced as a result of the weight reduction.

The company has also launched a 52m large boom concrete pump which boasts a reduced footprint. The KBR 52-5 has front double telescopic support to minimise space requirements when setting up.

The company said the expansive swivelling of the supporting legs was avoided, and that the operator could use the pump between narrow gaps to thread the support and for lowering the support legs. It said this usually required large spaces.

Klein has also launched a new two-cylinder piston pump, used for concrete delivery and for pumping soil during tunnelling.

The new S-tube valve-controlled dual piston pump KIP 9015 has already been used by a Japanese client, said the company. The client used the machine with 160kW drive power to pump tunnel overburden to the surface. The pump system is designed for flow rates up to 150m³/h at 28 bar and 75m³/h at 50 bar.

Chinese manufacturer Shantui has launched its truck-mounted pump series – the HJC5120THB-12 and HJC5120THB-16 – which are powered by a Volvo engine. The company claimed the series featured more power, excellent performance and high reliability.

The maximum capacity of the hopper is up to 800 litres, and the inner walls of hopper have an arc-shaped design to eliminate dead spaces for material deposits. The high wear-resistant wearing plate and cutting ring are said to cut down the user’s operating costs. The S-pipe valve features low height difference and is said to achieve smoother concrete flow.

Shantui said the central lubrication mode was adopted so that the hydraulically-controlled follow-up grease pump guaranteed the lubrication effects. All lubrication points of the multi-plate progressive grease distributor are fitted with blockage indicator to help with maintenance and checking. In the event of a blockage in any oil line, the other oil lines can still function normally, said the company.

Moving on to concrete mixing plants, Ammann has its concrete plants and mixers developed by Ammann Elba, the company created when German-based Elba was acquired in 2014.

The new CBS Elba concrete mixing plant is designed for small- to medium-sized businesses seeking flexible concrete plant solutions. The company said that it featured state-of-the-art design based on customers’ needs, and offered output ranges from 105m³/h to 160m³/h.

The basic unit can accommodate both EMS and EMDW single-shaft and twin-shaft mixers with a hardened concrete output volume ranging from 2m³ to 3.5m³. Ammann said the CBS Elba offered easy, low-cost transportation for stationary and semi-mobile operation.

A new line of mobile and compact concrete-mixing plants has also been launched by Ammann.

The first plant in the product family, the CBT 60 Elba Compact Concrete Mixing Plant, has an hourly output rate of 58m³/h. The entire compact line-up, available in the near future, according to the company, will provide a performance range from 30m³/h to 130m³/h.

The CBT 60 Elba is equipped with an Elba EMS 1000 single-shaft mixer and an integrated linear batcher for storing between two and four aggregate components. Ammann claimed fast installation times and trouble-free relocation resulting from the elaborate folding mechanisms. No foundation is required for plant installation.

In Cifa’s truck mixer pumps range, the company is continuing its evolution of the Magnum range.

The MK25H Carbotech has been further improved with the latest design and technical advancements derived from use of the machinery in job sites all over Europe.

In fact, Jürgen Steinhauser, project manager at Austrian-based Hilti & Jehle, said of SBM’s Linemix 3000, “Only such a powerful and reliable plant can produce a total of 120,000m³ high performance concrete for 50,000 tubbings in time, in year-round 24-hour-operation.”

It said producing concrete directly on site reduced CO2 emissions by up to 25%, as the required concrete was produced in the immediate vicinity of the construction site resulting in optimised building site logistics.

There is also the Euromix 2000 SM, with a concrete output of 100m³/h which has been working successfully for more than 15 years.

The company said the materials were transported separately and mixed in the quantity required by the operator without waste.

The K9 features a double conveying system for sand and gravel, with each system working independently and at different speeds.

Each belt is equipped with a weighing system which constantly checks the flow of the material.

All the materials are controlled by weight or by flow so the operator gets the exact amount of each element used during the cycle, said Kimera.