Design for ‘next generation’ skyscraper unveiled 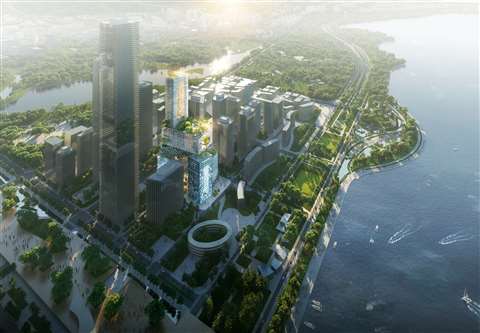 The skyscraper will be in Shenzhen, in the south of China

It has been revealed that a new 250m tall tower in Shenzhen, China, will be comprised of eight interlocking blocks. The skyscraper will be the headquarters of China-based real estate developer Vanke.

The project, which will be delivered by Netherlands-based architect MVRDV and UK-based engineer Arup, is said to be the ‘next generation’ of skyscraper design.

The tower – for which construction is due to start in the middle of 2019 – will have eight sections rising from four separate bases across two plots separated by a road, which join to form a single crowning tower at the top.

The 167,000m² project will house office space for Vanke as well as leasable offices, retail space, a restaurant, hotel, and outdoor space. MVRDV has nicknamed the project ‘Vanke 3D City’.

Winy Maas, co-founder of MVRDV, said, “Vanke 3D City can be seen as a new type of skyscraper. By stacking the required programmatic entities, initially proposed for two separate plots, on top of each other, the two individual Vanke Group Headquarter buildings are turned into a Vanke City.”