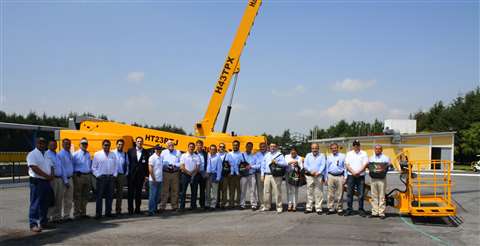 Haulotte Group has held a product demonstration in Mexico, aimed at increasing the awareness of aerial work platforms in the country.

Expo Haulotte Mexico was organised by subsidiary Haulotte Mexico in Toluca city at the beginning of July. “Considering the diversification of the Mexican market for aerial platforms over the last few years and its position as the second most important market in Latin America just after Brazil, Haulotte Group seized the initiative,” said a company spokesperson.

The company showed its telescopic boom HT23RTJ, launched last year. It has a 23 m working height and a horizontal outreach of 18.3 m. One of the model’s main features is its ability to reach maximum height in 56 seconds. Haulotte also informed customers about its aftersales service and demonstrated its new website easy spare parts.

The International Powered Access Federation (IPAF) made an appearance at the event, providing information about the importance of safety in the workplace and international safety standards.

Also present was Financiera Atlas, a specialist in providing finance for capital goods, as was Haulotte’s official dealer network for the country.