Have Middle East highs slumped? Challenges in the access sector

Powered access is used in wide variety of applications. This Genie S-65 Trax machine was put to work at a film festival.

In the depths of the worldwide credit crisis and its insidious knock on events there have been a few regions which we have held up like shining beacons of hope: China, South America, Eastern Europe and, the most glittering of all, the Middle East.

It should really come as no surprise that a worldwide credit crisis is indeed that and although the inevitable down turn can be held back its effects must eventually be felt in the most sheltered economy. It was towards the end of last year that the financial commentators started to predict that a significant number of unexecuted projects in the UAE (United Arab Emirates) would be cancelled or postponed in 2009.

According to Tim Richards, division manager of AL Laith Scaffolding LLC's powered access business which is based in Dubai, in the forth quarter of 2008 there was an 85% reduction in new contracts. "Dubai is said to have 25% of the world's tower cranes but a lot of them are standing there going rusty," he said.

Mr Richards was instrumental in setting up the AL Laith powered access business in 1995, not long after the company was established by Tony Nobbs. He says that over the last two years the market has been like a sponge, "We have expanded the business to around 350 machines and have had high utilisation."

In the last six weeks, however, there has been a change, Mr Richards has noticed that machines are coming back off hire, "Companies are being more discriminating about costs," he says. Customers who used to hold on to equipment throughout a job are taking off hire the equipment they are not using at that time to save money.

AL Laith's fleet encompasses a wide range of machine models from UpRight, Genie, Snorkel, Niftylift, Omme, Skyjack and Oil & Steel, the oldest of which are little more than two years old. AL Laith also sells new machines to end users. The most popular of these tend to be the Omme tracked telescopic booms which don't damage the marble floors of the shopping malls and complexes where they are used primarily for cleaning and maintenance activities. End users also like the UpRight single mast personnel lifts and small articulated booms.

Despite the slowdown in construction, "A number of projects have been iced," says Mr Richards and, "they are not selling houses," he does believe that there is still a decent amount of work for powered access. For example the accommodation blocks for ex-pats are still being built and the telescopic booms are very popular with the finishing trades working on commercial buildings and shopping malls.

The increased use of powered access has been driven by a combination of western safety standards and productivity issues. Many of the large contractors working in the UAE have their own strict safety guidelines which continue to be imposed no matter where they operate in the world. "European companies often have very strict rules and we encourage that and the setting up of training schools. In some organisations all their operators are IPAF trained but there are no rules in the Emirates"

There has also been a growing urgency to finish projects on time and punitive penalty clauses have been imposed which make the productivity benefits of powered access equipment increasingly attractive.

The United Arab Emirates has very few indigenous workers, of the five million people living in the UAE 75% are ex-patriots and of those 75% are labourers, "A lot of the workers have come here from the Indian sub-continent, "says Mr Richards, "and might have no experience driving anything, let alone a $200000 machine."

Training powered access operators in the Middle East has two major purposes the first is safety, "Safety enforcement lags behind," says Mr Richards "and it is our mission to improve it." The second is safeguarding the machines, "The machines are treated very badly," says Mr Richards, "there is a lot of wear and tear and damage."

When a company hires powered access equipment from AL Laith - an IPAF member all of whose demonstrators are IPAF approved - the company ensures all users of the equipment are trained and issued with a certificate of competence before they are allowed to operate the machines. AL Laith uses a branch of Instant Training to carry out the training, "Without the certificate they are not allowed near the machines," says Mr Richards but admits that once the machines are on site it is very difficult to police this.

Health and safety is very important to AL Laith where a full time H&S officer has just been appointed. In the last two years, "I have heard of one fatality and several injuries caused by the misuse of powered access equipment, but I have never had a report of any occurring through the use of our machines," says Mr Richards.

While most of the Middle East is in the same financial position as the UAE, Mr Richards says that Saudi Arabia's oil based economy continues to be strong. The banks in that part of the region have had a good year and the powered access business is strong.

Construction tends to be industrial: oil refineries, petrochemical plants and manufacturing facilities continue to be built: unlike the tourist apartments which have proliferated in other parts of the region. Powered access is used extensively in these projects with the rental capacity in Saudi Arabia Potentially higher than in the Emirates. One company that sees the potential is Niftylift which has recently signed a new dealer in the region (see Box story)

It's hard to predict what the future holds for the powered access market in the Middle East as the industry is young and has not experienced any of the cyclical ups and down of the more established markets. "The credit crisis is no different here than anywhere else," says Mr Richards.

"Lots of companies looked towards the Middle East as their salvation but it might be foolish to do that now." says Mr Richards. It isn't just the slowdown in the construction industry which makes him believe it's a bad time to start up in the region it's also the way that business is done.

"It was hard to get this business up and running but now we know we have good contacts and we are trusted. About 80% of our business comes from 20% of our customers; relationships are very important here - once you are trusted, you have very loyal customers." Relationships like that cannot be built overnight and anyone expecting a fast profit will be disappointed. There are also widespread problems being paid, with long waiting times or no payment at all.

Mr Richards does expect next year to have its challenges, there are between 1500 and 2000 powered access units in the UAE and he expects next year the market to be more like Europe, "Utilisation rates will fall and there will probably be some rental rate adjustment as the big five companies battle for position."

Mr Richards is confident that low rates alone will not win the battle, "Service is key, "he says, "but rental rates are in there. Our fleet is young and that will remain so, we also have the biggest service crew in the Emirates because that is of primary importance."

That AL Laith's business is split into four divisions will also help the company weather a downturn. "When one sector drops, another tends to pick up," says Mr Richards. "For example scaffolding is doing very well because of the types of building that are going ahead - not steel structures: last year it was less successful."

The mast climber business continues to enjoy high utilisation and plant hire, which has only been running for a year, is also doing well.

The Middle East may not turn out to be the magical promised land that many people expected but Mr Richards is optimistic about powered access and expects that after a dip levels of work will return to a "sensible" level. 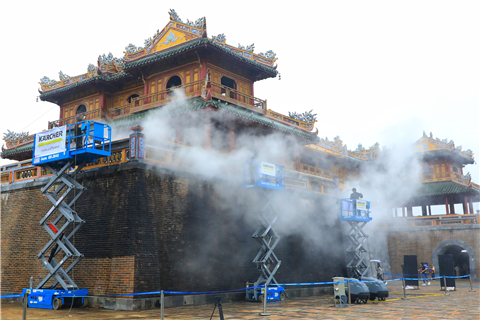