The energy sector continues to be a steady and diverse source of work where heavy lift and transport companies can find themselves working on a wide range of jobs. This article alone covers: wind farm work; generator and rotor transport; topside installation lifts; transition piece installation; jacket load-outs; and a wind turbine blade installation system.

Belgian-headquartered heavy lift and transportation multinational Sarens has long been active in the energy sector, enjoying a diverse array of commissions. This year has seen continued engagement by the energy sector with jobs including installing 12 wind turbines at the Dam Nai 2 Wind Farm in Vietnam, which Sarens says is now the largest of its kind in the country, and installing the tallest wind turbine towers in Australia at the Sapphire Wind Farm in Glenn Innes, New South Wales. 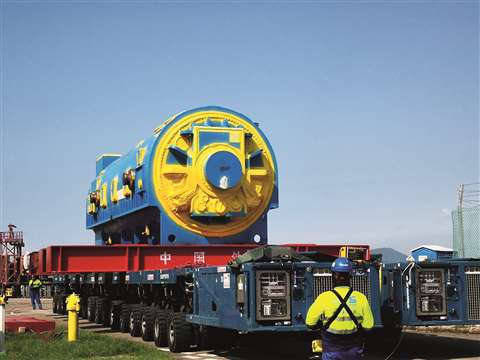 To transport the generator Sarens used two lines of 16-axle SPMT. A six-person crew then used an NTL 900-tonne floating crane to move it to the final lift site, working within the confines of a small site with heavy traffic, Sarens says. The generator, which measured 13.6 x 4.5 x 5.6 metres, was then transported to the lifting position and lifted and rotated into place using two 250-tonne overhead cranes, and a Demag CC 6800 crawler crane. The equipment was mobilised by barge from Belgium, and transportation took about one month. Assembly of the CC6800 took about one week, says Sarens. In all, 20 crew members were involved in the operation.

Remaining with super heavy lift cranes, international heavy lift and transportation specialist ALE has completed the lifts of three topside modules for an oil and gas project in Ingleside, Texas, USA using its AL.SK350. The last module to be lifted was the living quarter module which weighed 2,234 tonnes (including the cost of the block and tackle). For this lift the AL.SK350’s installation outreach was 42.8 metres and it was rigged with a 124 m (406 ft) main boom, a 49 m (160 ft) ballast radius, a heavy winch system, and 4,000 tonnes (4,409 tons) of ballast.

The lifts were used to check the modules fitted to avoid any delays when the topside is finally installed using a heavy lift vessel off the coast of Israel. 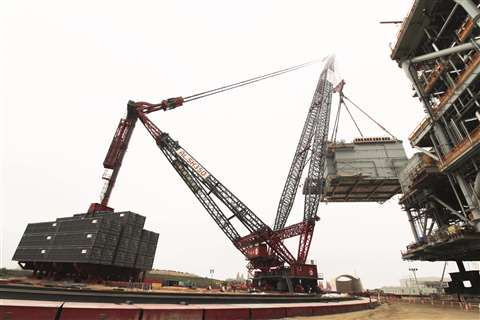 ALE has completed the lifts of 3 topsides in Texas, USA

ALE has also completed its scope of work on one of the biggest offshore wind farms in the world: Ørsted’s Hornsea Project One. ALE was contracted by marine engineering company GeoSea to provide the specialist offshore engineering alongside the marine transportation, sea-fastening, load-out and ballasting of over 100 transition pieces (TPs) in the UK.

Italian heavy lift and transportation company Fagioli won two awards for energy sector-related jobs at this year’s ESTA Awards of Excellence, which took place during the Bauma show in Munich.

The first win was in the ‘transport with a trailer and load more than 120 tonnes gross weight’ category.  Fagioli won this for transporting two 170 tonne rotors a distance of 450 km - from Genova to Premadio, Italy. The rotors had to be delivered to a powerplant up in the mountains, at a height of 1,250 metres above sea level.

For the job Fagioli first used two 11-axle modular trailer lines with 180 tonne girder beams, creating a convoy length of around 61 m. The journey started easily enough, covering 230 km in three nights, primarily on main roads and motorways. However, as the convoy got closer to its destination more and more challenges presented themselves. These included sharp bends, steep gradients and weak bridges. The bridges had to be reinforced before crossing and over bridge structures were also deployed. When the rotors arrived at the powerplant, the challenges continued as they had to be transported along a 500 m tunnel with restricted room.

More than 35 people were involved in the transport of the convoy each night and, over the course of the work, mobile cranes and a gantry crane were used to help modify the convoy’s configuration, which was changed three times. Six trucks (to aid convoy transport and for loading and moving operations over bridge structures) and SPMT (to aid bridge reinforcement) were also used. 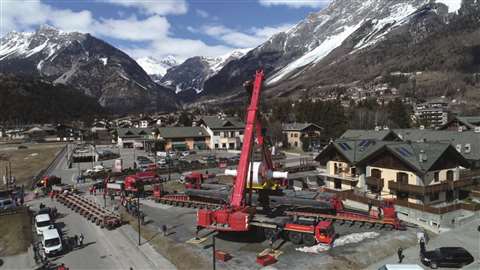 Fagioli’s second energy-related ESTA Award of Excellence was in the SPMT category; it won for a load-out project in Spain, moving 42 jackets for the renewable power sector. The jackets weighed up to 950 tonnes so Fagioli used a tailor-made jacket on 46 axle lines of SPMT to move them. In addition, climbing jacks, support towers, winches and mooring equipment were utilised.

As well as being heavy, the jackets were large in size, with the bigger ones measuring 66 m high, 32.6 m long, and 25.9 m. In order to be able to lift the jackets Fagiolo designed the frame structure with retractable edge main beams with movable stoppers. This, it says, allowed flexibility in handling the different configurations. Fagioli then used SPMT to lift the frame structure and jackets and they were move to the load-out quay.

Fagioli was not the only company to win an ESTA award this year for its work relating to the enegy sector; Liebherr-Werk Ehingen won the safety category with its single line guiding system (SLGS) developed in-house to make it easier to install wind turbine blades without the use of conventional tag lines.

Liebherr says the system is designed to work with rotor blade yokes from various manufacturers. Rotor blade yokes are used to install blades on the latest generation of wind turbines. According to Liebherr, to stabilise long rotor blades in the wind, helpers have had to be used on the ground with vehicles and, in some cases, even rope winches, to control the blades using long ropes. This, it says, requires a great deal of space on the ground as the force needed can only be generated if the ropes are spanned at an adequately low angle.

For erecting wind turbines in forest areas, this means that more trees have to be felled to accommodate this. However, claims Liebherr, its SLGS avoids these issues.

The system comprises three key elements: a winch, a fix point on the top of the boom and a roller sheave and assembly is easy, says Liebherr. For assembly the single-line guiding system is attached to the main boom on the side facing the load. A rope is then secured at the top of the boom head and tensioned using a rope winch below in the pivot section. A cable pulley with two connections to the outsides of the rotor blade yoke runs along the boom rope during the hoisting process. With its own power supply in the yoke, the two connections to the SGLS are tensioned so that the blade is stabilised in the wind and can also be moved into the correct angle for installation on the hub. Since the horizontal application of force on the blade by the main boom is perfectly aligned, the SLGS improves the load control during the blade installation, Liebherr claims. Safety is increased, says Liebherr, because only the crane driver and yoke driver need be present.