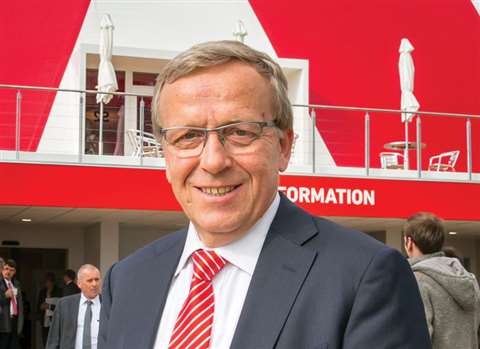 The European market is looking brighter than it has recently, according to Ammann, the Swiss-based company that manufactures roadbuilding equipment, although Lieven van Broekhoven, executive vice president of sales and marketing, warned that the recovery might not be coming quite as fast as some were predicting.

“For 2016 we are forecasting a single-digit increase in revenues, between 6% and 8%,” he said. “Growth will come from our increased globalisation drive – we are entering more countries and expanding our facilities around the world.

“We see growth in demand from the Americas and South-East Asia, while the Russian and Brazilian markets are difficult, and the Middle East has, of course, been hit by the oil price crash.”
He said that in Europe, which represents 50% of the company’s turnover, he saw the market was “up a little”.

And Mr van Broekhoven identified the rental market as an important growth sector for the manufacturer, which he said had plenty of work to do to increase its presence in this industry.

“On a global scale, we are not active enough in the rental market,” he said. “In Europe, this industry is very strong and we have a good presence with all the major rental companies, but it is clearly a growing global industry and we want to keep pace with this. We are keen to tap into this growing interest in rental and are looking for partners around the world – it’s a very important part of
our business.”

Meanwhile, van Broekhoven said that the recent Bauma show in Munich, Germany, had been the best ever for Ammann. He said he had engaged in more quality discussions with qualified buyers than before.

“I do sense there is an uptick in the market. I believe people have held off on capital investments for quite a long period of time – a couple of years – and they see the uptick coming as well. They’re getting ready to buy some equipment, and that is all sorts, not just Ammann.”

He said he saw confidence coming back into the European market.
“Not everywhere, but the UK, Germany, a little bit in Benelux. But the main drivers, I think, are Germany, France and the UK. The sentiment is positive, and I think it affects the rest of Europe in a positive way.”

With the countries bordering the Mediterranean, such as Spain, Portugal and Italy, he said he thought the sentiment was extremely good. “It will take a little while longer, I think, but the signs are all upwards.”

As to whether the potential growth was across Ammann’s entire portfolio of products, he said that for Germany, it was across the board, with the same for France. He admitted that 2015 had been difficult for the French market, although he was not worried.

He said he did not think it would ever go well for every single product in every single country with the range Ammann had. “It’s up one, down the other usually. But France and Germany are strong currently – very stable – unlike the last couple of years, and the UK is getting there.

“In the Mediterranean area – Spain, Portugal – I think the sentiment is a little bit stronger than the reality is. But I’m pretty confident it will come.

“I think it will not come as quickly as people think,” he warned. “Towards the end of the year it will start getting a little more traction. Over the last couple of years, all the excess capacity in terms of inventory has been flushed out of the market, so there is very little inventory.”

He said Ammann did not have an inventory issue in those countries, but the entire distribution channel, including all suppliers, had seen excess capacity.

“That’s been more or less flushed out if you look at the inventory numbers. I believe another three to six months and people will have to start purchasing,” said van Broekhoven. Ammann itself had got off to a good start, this year, he said.

“We have a very healthy order book, more or less across the board in terms of product segments.”

The Ammann range stretches from the lightest compaction equipment to the heaviest plants.

“We have the full range, from an 800kg small plate all the way up to a 25 tonne soil compactor, and tyre rollers, double drums and tandem rollers.

“So, on the compaction line we are one of the few players – not the only one – that has a truly complete line from hand held to the heaviest.

“We do a full line of pavers, and then on the plant side we do both asphalt and concrete, because we completed the acquisition of Elba-Werk a couple of years ago. So on the plant side, we have the most extensive range of plants in the industry from low cost plants to serve the low segments in markets around the world, all the way up to the most sophisticated 100% recycling plants – mostly for western Europe but some other countries as well.”
While those top end plants are becoming increasingly sophisticated, he felt there was still further to go down that path.

“We are working on some things,” he said. “The question for me is where do you draw the line – when does sophistication become nice to have but not really necessary.”

On the subject of whether the new technology might not suit older operators, he said, “To me it’s like a weighing scale. On the one hand you have what you and I would call the older people in the work force that understand the product that a plant is supposed to produce, the processes it takes – the guys that have the street smarts and the hands-on experience. They could have difficulties with all the automation and software, telematics and all
of this.”

He said that on the other side of the scale there was a younger generation for whom software was not an issue, but he felt that they did not have the hands-on experience, or what he referred to as “the real life experience with asphalt”. He admitted that it was a difficult balance.

One of the latest projects for Ammann has been its first autonomous vibratory plate. The APH 1000 TC features electro-hydraulic controls, based on an existing remote-controlled vibrating plate.

In Teach In mode, the operator uses the remote control to navigate the plate along the borders of the area to be compacted. This is essentially setting the boundaries for the plate compactor.
The number of vertices is not limited and the machine automatically detects the closed border.

After clicking the Run button, a working strategy is calculated and the field is compacted strip by strip. A GPS system is supported by an electronic compass and collision detection. Deviations of the GPS system are compensated by an overlap of the passes to ensure all areas are compacted sufficiently, according to Ammann.

“This is a prototype, of course,” said van Broekhoven, “and we have a lot more testing to do in the field, but this kind of innovation drives positivity throughout our business – we need to think outside the box and ask ourselves what the future looks like for our industry.

“We’re also looking at some other products too – there is work in progress here.”

He said that as all manufacturers had been spending huge amounts of money in recent years on meeting emissions regulations, this kind of forward thinking was very welcome.

“That said,” he added, “it will take a while for this sort of technology to gain traction in the market. The number of global customers that are currently investing in high tech equipment is actually quite limited. High technology is gaining ground in very developed markets, but that’s not where the
volume is.”

“It’s great technology, and there is definitely a place for it in the market, but not necessarily globally.”

Whether it is taken as a serious addition to the compaction world depends on the public, he said. At Bauma, with Europeans visiting the stand, he said the autonomous model was well received with many enquires as to when Ammann would be coming to the market with it.

“What we have here is still under development – it’s still a prototype,” he said, but he felt that the launch would probably be early next year.

When asked whether this could be the start of a range of autonomous machines, he said, “With technology today, you can do just about anything. I think the market will dictate how much of that type of technology it will accept.

“I do believe – and I don’t think it will change anytime soon – that there are geographical areas where this will go well, but not globally. You can have a main platform of products, be it plants or machines, which you build for the world, but you still end up having to regionalise some of the products to fit some of the regions better.”

Within Ammann, he said that if he had to pick the one product segment which needed the most work, it was the asphalt
paver line.

“We have a very good solid line up to what we would call the medium sized pavers, but we need to fill the gaps in terms of large pavers,” said van Broekhoven.