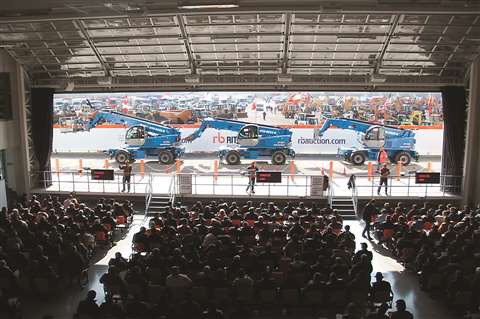 Jeroen Rijk, senior vice president for sales in Europe at Ritchie Bros, has seen some interesting trends in the used access equipment sector. He shares these experiences with AI.

According to Jeroen Rijk, at worldwide construction equipment auctioneer Ricthie Bros., the used access market has grown considerably in the last five years. “The access business is already quite an important part of our business. In 2008, we saw a slowdown in the market - lots of rental companies had too much inventory, and that’s when we really started selling large quantities of access.”

“We then had a peak in 2009, which has gone down a little - that was not sustainable because people were selling heavily, and now it is quite stable.”

Access equipment now makes up about 10% of total sales at Ritchie Bros. Mr Rijk says that most of the auction sales are going to companies looking for up to five machines, rather than much larger quantities. “We have seen a lot of access in southern Europe and Spain because of the large surplus. Some 80% goes for export, but they go to different regions including India, Middle East, Australia, and not just one market, so you don’t have the negative effect of flooding a market with 300 units.”

Of course emerging markets are a popular destination for used equipment. “The advantage of access equipment in comparison to other construction machines is that even if it’s been used for 10000 - 12000 hours it has suffered very little,” says Mr Rijk, “So for a company in an emerging market that just wants four, five or six units, it is an advantage to be able to get those machines. In many cases those companies get bigger, and then go to manufacturers/dealers and get finance, so you see how new companies in these markets are growing.”

Another observation is that a brand of used equipment will sell better in markets where that manufacturer is strong for new equipment. “You pretty much know before an auction where equipment will go. If a certain brand has been able to establish itself with dealers and service you will see that is has some impact on the used equipment brought in there.”

In all markets the choice is for leading, established brands. “In emerging markets there is not a flow of good quality used equipment so people have to go out into more mature markets where it is available. When Spain was on the up it went to northern Europe to buy.”

As expected North America and Europe are the biggest markets for used equipment, with South America and the Middle East showing strong growth; behind them the likes of Australia and Asian countries will rear their heads as and when a one-off customer needs equipment.

Speaking to AI in late June, Mr Rijk said he was expecting to sell some 500 pieces of access-related equipment over the next few weeks at auctions in Spain and the Netherlands, “electrics, diesels, big scissors, small scissors and a mix of booms, including larger ones.”

Much of that equipment is still coming from Spain, where Richie Bros. holds four auctions a year at its Ocana site. In June the company sold 132 booms, 156 scissors and 95 telehandlers there, all from the domestic market. “After 2008 no one knew what was going to be the real need of the market in the future, I think there were lots of companies that thought it has to pick up, so they kept their machines for longer.”

The situation varies at different auction sites. The Netherlands sees more rental companies that are renewing their fleets, rather than reducing their fleets, and the machines come from across Europe. “In much of Europe, renewal is a major part of business, because they have had the equipment for so long. We have also seen very good prices for clean, late model equipment. Sales of new are not what they used to be, so there has been less equipment available through the whole market.”

Although hesitant to be specific on the matter, Mr Rijk believes that the used equipment market has benefited from the downturn overall. Turning his attention to the whole access market, including used and new equipment, Mr Rijk adds, “The question is: when are banks going to lend money to companies in certain markets? If you look at the southern European market they have gone through a deep recession, but I was in Holland this week and it doesn’t really look promising there either. We don’t know what is going to happen in countries like France, or how long it’s going to continue. It’s more stable than a year ago but no one knows when things will get back to normal.”