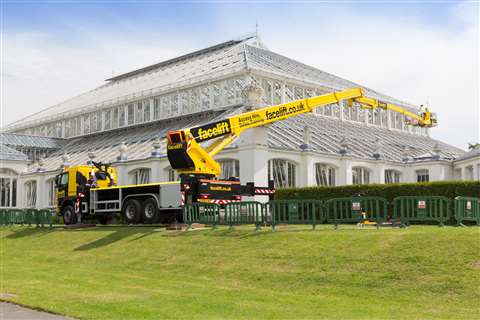 Facelift with its Bronto 50 at Kew Gardens in the UK

Facelift was called on to help in a major restoration project at Kew Gardens in the UK.

The rental company was asked to assist with a survey being carried out on Temperate House, the largest surviving Victorian glasshouse in the world. It is being restored in a five-year, UK£34.3 million restoration scheme.

The glasshouse and its surrounding landscape will be restored, while the adjoining Evolution House will be converted into a world class public engagement centre.

Kew Gardens also hired a Facelift operator whose expertise ensured that the fragile glasshouse was not damaged during the survey, and that the machines hired were used to their full capability.

For the exterior survey, a Bronto 50 was chosen, as its 50 m height meant Kew Gardens staff could get a complete ariel view of the site. Its large basket meant that several team members with different specialities could view the greenhouse simultaneously.

For the survey of the interior of the glasshouse, a Multitel SMX was used. Its light weight, reach and height, and easy manoeuvrability meant that it could easily access the confined spaces of the glasshouse, and negotiate its way round the many large trees within, said Facelift