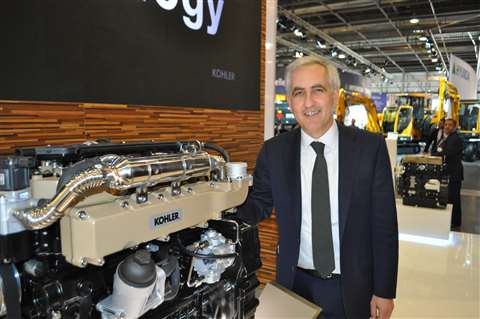 The engine platform ranges from 30kW to 100kW, with three different engine sizes including 1.9, 2.5 and 3.4 litre versions, which have a high-pressure common rail injection system.

According to Kohler, the engine is capable of delivering fuel savings of up to 10% over previous models. It is said to be capable of reaching 100kW of power at 2200rpm, and 500Nm maximum torque at 1400rpm.

The company added that machine productivity increases of up to 15% were also possible using the engine, due to improvements made in integrating the KDI 3404’s turbo system with the engine and electronic control systems.

The engine has been developed using Kohler’s “best fit” principle which the company said was a combination of developing improved efficiency within a more compact design.

The company said the KDI engine series’ compact footprint had targeted OEMs considering reducing the size of their equipment, including making savings on space in terms of engine housing.

Kohler said the new engine series, which uses a selective catalytic reduction (SCR) system, has been developed so that a DPF (diesel particulate filter) can be added to help meet stricter emissions levels that will be required to meet a future Stage V emissions criteria, which is expected to be introduced in 2019.

Vincenzo Perrone, of Kohler, said the engine had been developed in response to industry feedback that called for more efficient engine design, which was also more compact.

He said, “We believe this is a great product and customers have already said to us that they like that the engine lower fuel consumption. We have made a real leap frog with the advances that have been made with this series.”