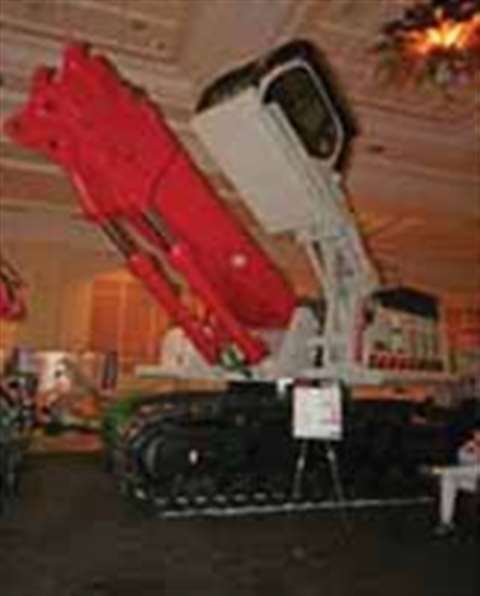 The 2007 annual NDA convention proved to be the largest in the Association's history, with more than 1,800 delegates and more than 120 companies exhibiting their wares to the industry.

As normal, the event provided a mix of social and educational events (with perhaps a greater emphasis on the social for the delegates).

The event kicked off with the Association's golf tournament on the Saturday, with 132 taking part. Sunday saw the registration desk open and the opening night party sponsored by Caterpillar, with formal events beginning on the Monday. After a breakfast sponsored by Atlas Copco, and introductions by several Association officers, George Hedley delivered the keynote speech. He is president of a US7$75 million (€55 million) construction company, which he took just seven years to build up from zero. Entitled ‘The business success blueprint’, his presentation outlined the steps he believes are essential in developing a successful business by establishing goals for both the business and your self in order to succeed.

He was followed by Chad Hyarns whose presentation, ‘Who needs eeds legs when you have wings' outlined how to survive challenges and adversity proved inspirational and riveting.

The doors then opened on the exhibition, and once again some large machines had been squeezed through the doors of the Mirage. Of particular note were two high reach demolition rigs, one from Hitachi sporting a Jewell boom, and the highlight of the exhibition, a LinkBelt with a Jewel manufactured boom (see news this issue). Also on show was a plethora of other demolition attachments – shears, breakers, crushers – and other equipment from the 120 exhibiting companies.

And the social whirl continued. Monday night saw the annual theme night, based around Polynesia. Dancers and musicians from Samoa, Fiji and Hawaii provided the entertainment (although some of the shirts on show were almost as loud) Three breakout sessions were held on the Tuesday morning, which were repeated to allow delegates to attend more than one during the morning. The late morning and afternoon were again spent in the exhibition halls touring the booths.

The final social event was the annual cocktail reception and banquet, during which the incoming NDA president, Drew Lammers, introduced himself to the attendees, and seven association scholarships were awarded, totaling US$31,000 from the association and membership. The final task was the raffling off of a Harley Davidson motorcycle, which was won by Shirley Goldstrum The final event of the convention was a presentation on the Worker Training and Certification programme (part of an NDA–OSHA Alliance programme).

The Association returns to the Mirage in February 2008 for its 35th annual convention, just before the ConExpo/ConAgg show – guaranteeing that Las Vegas will be the venue of choice for the industry at the beginning of next year. See you there.