Mobility – but not at any price 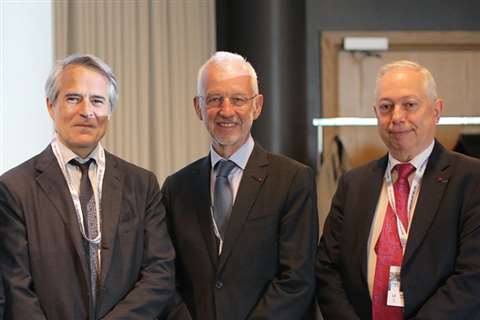 From the left, Morin, Marchand and Gabellieri

Among the key challenges for the long term sustainability of the construction industry is ensuring the right balance between the opening of the EU Internal Market and those rules and tools aimed at ensuring a level playing field for companies and the respect of workers’ rights, Jean-Louis Marchand, president of FIEC (the European Construction Industry Federation) told the organisation’s 2017 conference in Stockholm.

“Several Member States are still facing dramatically high unemployment rates, in particular amongst young people, while at the same time in others, companies cannot find workers with the right skills.”

He told the conference, “We need mobility within the EU, but not at any price.”

He said the cost of machinery had been levelling, but that there was tight competition for work.

“We must take responsibility for machines and people across borders,” he said.

Jackie Morin, from the European Commission’s Directorate General for Employment, Social Affairs & Inclusion, is the head of the unit concerned with the free movement of workers (EURES).

In one of the keynote speeches, he said that construction was a very open sector, with 40% of companies providing cross-border services. When it came to the posting of workers – the moving of EU workers, on a temporary basis, from the Member State were they usually work to another Member State – he said that the revision of rules was about fairness.

“It’s not east versus west,” he said. “It’s not protectionism, but protection and fairness.

“Posting is an opportunity for companies and employees, not social dumping. There is a need for rules.”

He said social ID cards, like those introduced in Belgium, France, Finland, Luxembourg and Sweden, should not be discriminatory, and should not be a financial and administrative burden adding that there was a responsibility to fight abuse and fraud.

“Fairness is what you do beyond the rules,” he summed up. 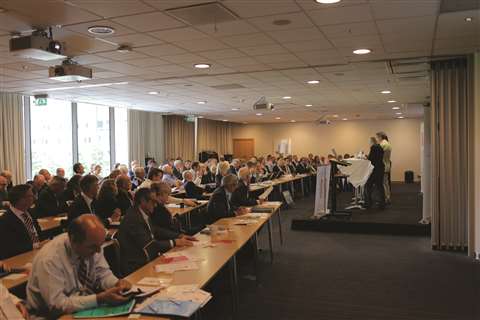 Marchand agreed that the construction industry was confronted with fraud and abuse, saying it was caused by, among other things, difficulties in controlling cross-border situations, as a result of a lack of data exchange between Member States, and loopholes in the existing legislation.

Bruno Gabellieri, secretary general of AEIP (The European Association of Paritarian Institutions), spoke about the social ID cards, saying their function was to promote transparency on construction sites, to tackle bogus self-employed workers, and to overcome cross-border difficulties.

He has been running a project to map existing cards and to check on the possibilities of a cross-border card.

“Social ID Cards are already in a number of countries,” he said, “but the exact functions differ country by country.”

He said there was a need for common approaches and functions across Member States.

“The project demonstrated that the use of social ID cards is possible under the EU Treaty,” said Gabellieri

One the subject of social ID cards, Marchand said, “It is in our interest and it is our duty to continue to co-operate with our social partner, the EFBWW (the European Federation of Building & Woodworkers), and with the EU and national authorities, in order to ensure that the tools and measures put in place adequately take into account the circumstances of our industry.”

He said that construction was not a traditional industry.

“The problem is that the European Commission thinks that we are. Many SMEs (small and medium sized enterprises) don’t know where their workers will be in the second half of next week.”

Katarina Norén, head of the central function purchasing and logistics at the Swedish Transport Administration, talked about contracts with requirements concerning equality, health and safety, etc, and their monitoring.

“We have a whistle-blower function,” she said, “but we never get a whistle. We have to work together. We want an international market, but not at the risk of workers’ safety and conditions.” 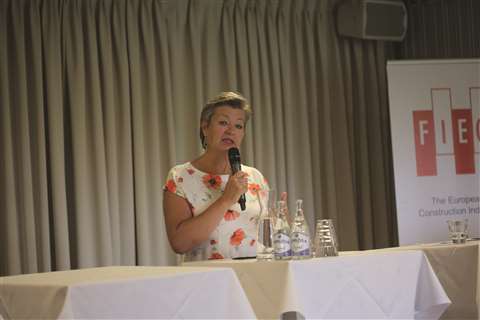 The Swedish Minister for Employment & Integration, Ylva Johansson, told the conference that Sweden’s population was growing rapidly, through increased fertility, living longer and the introduction of asylum seekers – she pointed out that since 2015, Sweden had taken in the highest number of any country.

This has led to a need for houses and schools, she said, leading to a shortage of skilled labour.

She said that Sweden now had the people – refugees – and had the jobs, and so found the need to invest in training.

Johansson recognised the problem of the grey economy in the construction market, saying, “We need to do more to fight the grey area and social dumping.”