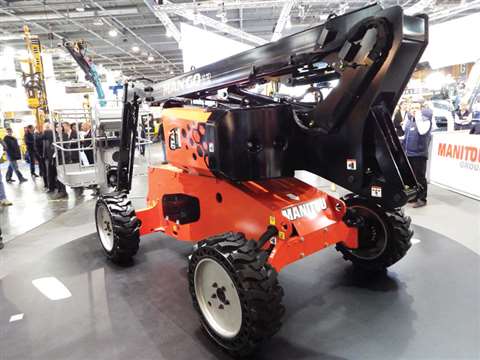 AI rounds up the latest booms and how they reflect the requirements of modern-day work environments.

There has been a number of self propelled boom launches in recent months but none of them have been in the height range of Genie’s 180 ft SX180, presented in 2013 at bauma, or JLG’s 185 ft 1850 SJ, launched at ConExpo in 2014. That means it’s been well over a year without a rival making its move into this height category. Of course, we still have Bauma next year and there is no reason why something big should not appear there.

Genie’s superboom range filler, the 150 ft SX-150 came somewhere close, when it was launched in February. The boom uses an identical, field-proven chassis design to the SX-180 and ZX-135 and is aimed at applications in construction, maintenance, telecommunications, gas and oil refineries, chemical maintenance, and large utility applications.

The model reaches its full platform height of 151 ft in under three minutes, says the manufacturer With a horizontal outreach of 80 ft, the model also offers 70 ft of outreach at 120 ft of platform height. Lift capacity is 750 pounds for a maximum of two people. Weighing 50,700 pounds, with a tail swing of 3 ft 6in and ground clearance of 15 in, the lift is transportable on a standard trailer; no over-size permits are required. When it comes to specifications, maximum working heights often grab the headlines, but we all know the crucial element is horizontal outreach for day-to-day activities.

And it is in this area that one manufacturer, namely Snorkel, has big plans in the near future. Snorkel’s owner Don Ahern told AI earlier this year a large boom is in the engineering process, destined to be higher than 126 ft. In addition, there will be an even bigger boom, with about 150 ft working height, focusing on horizontal outreach and high capacity. It is likely to be launched in 2016, says Mr Ahern. “The horizontal will be in the 125 ft range and the capacity in the 1000 pound range unrestricted.”

Snorkel officially launched the first in a new line of mid-size telescopic boom lifts at The Rental Show in New Orleans. The Snorkel 660SJ will be the largest model in the new family of four models, which also includes the 40 ft Snorkel 400S, 46 ft Snorkel 460SJ, and 60 ft Snorkel 600S. The Snorkel 660SJ delivers a 66 ft maximum platform height, with 58 ft, 6 in maximum outreach, and it can lift up to 600 pounds. Mr Ahern explains the new booms incorporate many reliable features Snorkel was known for. These include piston pumps and an open loop hydraulic drive system which delivers competitive performance without the complexity of multi-pump hydraulics. Standard on the booms will be a fixed frame chassis, while oscillating axles are optional.

Moving to a lower height category is Skyjack’s SJ86 T telescopic boom, unveiled at the Rental Show in February and making its European debut at Intermat. The manufacturer is also celebrating its 30th anniversary this year. “When our customers expressed the need for a boom with higher reach and greater capacity, we listened,” said Skyjack president Brad Boehler. “It’s an exciting time – we’re very pleased to be launching a new telescopic product, the SJ86 T, which will give Skyjack customers many new levels of opportunity.”

The new SJ86 T telescopic boom with jib is designed to meet customer demand in the rental industry with its higher capacity and greater reach. The latest model boasts a working height of 28.21 m (91 ft) and horizontal outreach of 23:42 m (75 ft). The jib has a range of +65 degrees to 60 degrees and features an optimised design that improves its strength. Sticking with the rental show, MEC unveiled its 60 ft boom lift, the 60-J, at the show in New Orleans.

It has a 600 pound lift capacity, 42 ft and 8 in of outreach and 45% gradeability. The unit can be powered by either diesel, battery or with a hybrid option.

Standard features of the 60-J include an 8 ft work basket, a continuously rotating turret and permanent four-wheel drive. A 6 ft jib adds 135 degrees of motion to the unit and the platform rotates 180 degrees each way. The boom and riser reaches full height in 50 seconds and the boom can be fully extended in just 20 seconds. The unit’s tailswing is 3 ft, 11 in. The inside turning radius is 6 ft, 6 in and the boom has 13.5 in of ground clearance. It can be driven at full height as well. The boom has a diesel engine and weighs 17900 pounds - the battery version will weigh about 18500 pounds.

Remaining on the subject of power options, a requirement for flexible machines that can be used inside and outside is growing. Genie has gone one step further with the launch of the all-electric Z-33/18 boom. Genie has opened its first testing facility in Europe for new products and introduced the initial production model of the 12 m working height Z-33/18. It was launched at APEX in June last year but became production-ready towards the end of the third quarter in the same year. It is designed for indoor and outdoor maintenance applications and is well-suited to sensitive surfaces where space is restricted. It weighs 3640 kg.

Built in Europe at Genie’s factory in Perugia, Italy, to suit the needs of European customers, The Z-33/18 is the first model to be designed and manufactured outside the USA. In the past, all Genie models went through the research and design process in the USA before being introduced to the European market. It is the demand for flexibility that has inspired Manitou’s latest boom, launched at Intermat. The Man’Go 12 has a working height of 11.91 m and an outreach of 6.5 m.

It weighs 4.1 tonnes, while capacity is 230 kg with up to two people in the basket. Basket dimensions are 1500 mm x 987 mm, while machine dimensions are 5504 mm x 1800 mm. One of the main features is the different boom structure; there is one cylinder for the two-section boom. There is also easy access to components and easy transportability thanks to well-positioned tie-down points and two lifting points each at the front and back so that a sling is not required.

Francois Desbriere, head of product marketing at Manitou, told AI, “An advantage is the elevation structure, which makes it fast in its elevation and allows us to reduce the weight; 4.1 tonnes is very light for this type of machine.”

“What we wanted to do it is find technical features that are attractive to the user but keep the DNA of Manitou in that the controls are the same and the robustness of the machine is the same.

“Manitou would like to move slowly and we will see with this new concept how it goes. In the future, why not try and produce more booms, but for now we will concentrate on this one and see how it goes.”

Fellow French manufacturer Haulotte announced a new rough terrain articulated boom, this time with a 20.6 m working height HA20 RTJ. It follows its smaller sibling the HA16 RTJ, launched in 2014, and demonstrates the features now required from modern boom lifts. Working height is 20.6 m, while horizontal outreach is 12.1 m and up and over clearance is 8.1 m.

The HA20 RTJ offers the best lifting speed of the market, says the manufacturer, of 48 seconds. Its weight, being less than 9.5 tonnes, is a distinct feature says the manufacturer, and the machine is compact with a transport height of 1.8 m and a length of 6.4 m – it means two machines can be transported on a flatbed trailer. Ergonomics has been designed into the upper control box making it easier for the operator to intuitively use the machine; the joystick can be used with one hand making it possible to hold onto the guardrail with the other. There is also a new tools tray.

Anticorrosion treatment is applied on all pivot pins and non-painted parts, increasing their durability by three times. The platform is fully modular, made of eight elements independently replaceable. There is direct access to key components and there is a Pre-diagnostic screen with connection to Haulotte Diag for advanced diagnosis.

Another example of how booms are being shaped for the modern world are three JLG updates shown at the Rental Show in February. The 400S and 460SJ are telescopic boom lifts, and the 450AJ is an articulating lift. Their enhanced system designs and new hoods increase in-service time, which improves utilisation rates and owner Total Cost of Ownership (TCO).

The lifts employ fewer hydraulic hoses – up to 40% fewer – and streamlined hose routing compared to previous models. This reduces the number of potential leak points and minimises servicing. The MDI display on the machines communicates full language text, not just fault codes, which may simplify troubleshooting and reduce the duration of service calls. The hoods feature a new design made of a new Dura Tough material. Dura Tough is a stout-yet-flexible polymer that won’t tent like steel and is not as brittle as ABS. Thus, fleet owners may spend less time repairing or replacing covers damaged on the job.

“We’re building lifts that meet the industry’s calls for machines that are durable, easy to service, and improve operator productivity,” said Corey Raymo, JLG Industries’ global product director for AWPs. “These machines are also designed for the world market, so they are easily transportable. They can be driven into shipping containers and even have options for oversized tyres that can be flipped to ship.”

While the big established manufacturers continue to update their product lines, others, in emerging nations are making their first forray into the boom sector. The first boom from ELS is the AE15. It was launched back in June last year, and was the first boom product in the Turkey-based manufacturer’s range. It has a 15 m working height, 9 m outreach, and is AC battery powered. Its main advantage is flexibility for indoor and outdoor applications compared with scissor lifts. It is designed to work in a wide area thanks to its outreach.

Kerem Bayrak, member of the board with ELS, explains the reasoning behind the electric boom development. “We decided that having a full battery range with articulating booms would be more relevant. Consequently we started the production of battery booms before diesel models. Also, requests from construction companies, industrial facilities and rental companies influenced our decision. We wanted to have the advantage of a new product family in line with customer expectations in the market.”

Since the launch at APEX ELS has sold around 50 units if the booms, says Mr Bayrak, mostly in Turkey, although some have been shipped to Germany. Next up will be a 22 m telescopic four-wheel drive boom to be launched at bauma next year.