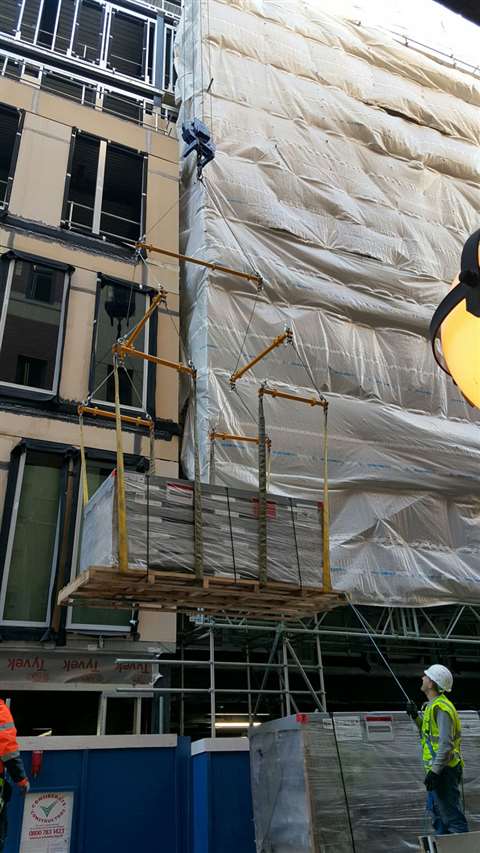 Below-the-hook equipment manufacturer Modulift solved a challenging problem involving the application of tower cranes on a high-rise development in London, UK, in an area where busy streets, restricted access and congested sites are prevalent.

LSC Facades called Modulift engineers onto site, near the famous Fleet Street in England’s capital city. A complex rigging solution was required to lift pallets from a lorry in Fetter Lane, using a tower crane that was already on the construction site.

Modulift designed a one-over-two-over-four spreader beam configuration to lift four non-standard pallets for the contractor, which provides exteriors for a variety of projects, including landmark public buildings.

The loads were fixed to pallets measuring around 3.5 x 1.5 metres, the heaviest weighing 950 kg. The narrow street, combined with the height of lift and tower crane operator's limited visibility, presented big challenges. The street remained open but traffic was not allowed to pass during lifting.

As the load was ‘basketed’, it might have been unstable, so the Modulift engineering team chose the one-over-two-over-four spreader beam configuration.

Tom Cox, production supervisor at Modulift, explained, “This configuration creates a statically determinate or balanced lift. There is limited skewing so the load is evenly distributed, which was especially important in this case given the limited dimensions we had to work with because of the narrow street and surrounding environment.”

Cox added, “Although it is fairly unusual to see this rig used in an urban construction scenario like this, it is a common solution for lifting sections of modular buildings. One-over-two systems are particularly commonplace in the oil and gas sector for skid lifting systems where there are four lifting points.”

The spreaders were supplied from stock and the rigging was set up in less than an hour. The spreader beams were assembled before dispatch to the customer for ease of transport.

Modulift personnel were on site to conduct training and oversee the lifts when four pallets were moved in one day. The same rigging formation will be used when more batches of facade materials arrive in the coming weeks. In the meantime, the rig has been stored, fully assembled, on LSC Facades’ busy construction site.