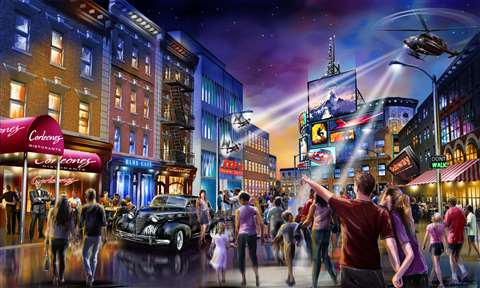 An additional round of public consultation is now planned for the London Paramount Entertainment Resort in North Kent, UK, which the developers say is because of changes to the masterplan.

The £2 billion (€2.54 billion) Hollywood-style theme park was announced in 2012, and is being planned by a consortium of UK and international companies.

The proposed development is on the Swanscombe Peninsula in the River Thames, in North Kent, and will be on a 353ha brown-field site close to the Ebbsfleet International Eurostar station.

London Resort Company Holdings (LRCH), the developer behind the project, has said that the company had completed a further full year of environmental surveys and was “making good progress on the transport studies, along with the business plan and masterplan reviews”.

David Testa, on behalf of London Paramount, said, “While we had hoped to have submitted an application by now, it is much more important to ensure the evidence base is robust and comprehensive to maximise the prospects of success, which means the preparation time is longer.

“The funds are in place to take this project through the planning process.

He said, “We received a wealth of feedback at our consultations last year which, along with new information from further studies we have conducted in the area, has allowed us to refine our masterplan.

“We were always conscious that there was a need to share more detailed information in relation to transport and ecology, and we’ve been working hard on those reports.”

He said that, given some of the changes that were being made to the masterplan, a decision had been made to hold a further round of public consultation on the updated information.

“This decision comes as part of our continued dialogue with the Planning Inspectorate and local authorities in Dartford, Gravesham and Kent, and the Ebbsfleet Development Corporation.”

Following the further consultation events, it intends submitting the application to the Planning Inspectorate in 2017.

The Planning Inspectorate is the government agency responsible for examining planning applications for nationally significant infrastructure projects (NSIP). LRCH said that the specific challenge in relation to an NSIP was that the process for submitting a planning application, known as a Development Consent Order, was heavily front-loaded. It said that nearly all of the detail had to be assembled before submission rather than amassed or worked on as the scheme was considered.

LRCH said that traffic and transport were the greatest challenges facing the local area, and that it had been working closely with Highways England, the Garden City and others on the proposed access route, as well as continuing detailed work on its traffic modelling.

The additional consultation will represent the fifth stage of a programme of community engagement carried out by LRCH, which has already been attended by over 8,000 people.

“In the interim,” said LRCH, “the London Paramount team has just written to local authorities, parish councils and residents’ groups in order to establish a Community Liaison Group to ensure more regular information is being shared with the local community as we lead into the planning submission and beyond.”