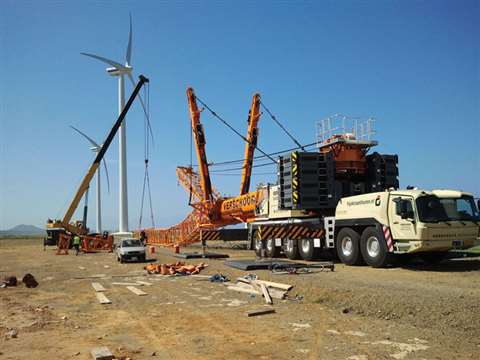 The trends for taller turbines and remote locations in the wind energy market pose a challenge for the crane industry. Laura Hatton investigates

Wind turbines are now reaching a height of 150 metres with 3 MW hubs. The trend for larger wind turbines is seen in a number of markets across Europe, including Germany, Scandinavia and the UK.

Klaus Kroeppel, Manitowoc vice president of sales, central and Eastern Europe, says, “The latest generation of wind turbines require much larger cranes to carry out maintenance and repair work, such as changing rotor blades or generators.”

In China, the story is similar, as a spokesperson from Chinese crane manufacturer Zoomlion explains, “Wind farms are being built in remote areas and the generators are becoming larger. As a result, the requirements for the dimension of lifting equipment are higher. Nowadays, 2 to 3 MW or even larger wind generators are being installed and 500 to 800 tonne capacity cranes are becoming mainstream.”

To accommodate the latest demands generated by the wind power industry, Zoomlion offer the QAY800 wheeled mobile crane. It can have a wind plant jib, making it capable of installing 2 to 2.5 MW wind generators, the manufacturer says. In addition, it has fast assembly performance, and has a strong and stable lifting capacity, the manufacturer added.

Also from Zoomlion is the QUY350 crawler crane. “The model has extendable and retractable crawler carriers, which satisfies the needs of driving on narrow roads at wind power farms,” the manufacturer says. For ease of transportation, Zoomlion’s QUY550W crawler crane has a superstructure and undercarriage that are separated to make transportation a lot easier, the manufacturer says.

The latest model from manufacturer Terex Cranes is the Superlift 3800. The crawler is designed with wind turbine installation in mind and can erect turbines with a hub height up to 150 metres. The crawler’s boom can be erected without an assist crane and it requires less counterweight than previous models.

“All crawler models, from the 400 tonne CC 2400-1 to the 3,200 tonne CC 8800-1 Twin use the same counterweight slabs,” Guntram Jakobs, Terex product marketing manager for crawler cranes, says. “This allows better inventory management and, for companies with several depots, saves transportation costs. In addition, all components have been engineered for optimum transport in all markets on the globe. Every component is less than 40 tonnes and less than 3 metres in width and height.”

Also from Terex is the CC 8800-1 with Boom Booster kit. “The new Terex Boom Booster kit can increase lifting capacity up to 80 %,” Guntram Jakobs, Terex product marketing manager for crawler cranes, says. “The kit can be disassembled into multiple sections and transported in 40 foot open-top containers, making it fast and cost-effective to ship. It is available both with new cranes and as a retrofit for existing models.”

From Manitowoc is the MLC650 crawler crane which, according to the manufacturer, is perfectly suited to carry out repair and maintenance work on the latest generation of wind turbines. The design incorporates the variable position counterweight (VPC) system.

Road conditions
One major concern for the crane industry is that wind farms are being built in increasingly remote locations and access roads are either non-existent or in poor condition. For areas where road conditions on the site are unsuitable for a crawler crane, end users are looking at alternative crane types.

Canadian crane service provider Guay, for example, uses wheeled mobile telescopic mobile when crawlers are not suitable for the job. Guillaume Gagnon, Guay vice president, says, “We have a Liebherr LTM 11200-9.1 that we used to erect Enercon E92 wind turbines on a 100 metre tower. The road to site was only six metres wide so we were not able to use a crawler crane. We also needed to go on public roads. In addition, we couldn’t use crane pads at this site to assemble a lattice boom on the ground. As a result, the LTM 11200-9.1 with its telescopic boom was the right crane for the job.

“If we don’t need to go on public roads between the turbines we use a Demag CC 2800 with narrow track,” Gagnon adds. “On projects with large roads we use a Manitowoc 16000 with BRS and WA options. The BRS and WA upgrades are really useful because without them we would need to use a bigger crawler, which means higher cost.”

In Japan, the most popular crane type for installing wind turbines are crawlers and all terrain cranes. Popular models include the 650 tonne capacity Kobelco 7650 crawler crane and the 550 tonne capacity Tadano AR-5500M all terrain crane. A spokesperson from end user company Uchimiya says, “Both models have a high capacity and are useful for difficult wind turbine installations.”

Another option for turbine installation is a tower crane. From Liebherr's tower crane division, Liebherr-Werk Biberach, is the 630 EC-H 70 Litronic and 1000 EC-B 125 Litronic tower cranes. “Wind turbines in low wind areas are, as a rule, not erected in large wind farm arrangements, but in wooded areas or locations difficult to access,” a spokesperson from Liebherr-Werk Biberach explains. “This is where the major advantages of tower cranes can be put to best possible use.

The 630 EC-H 70 Litronic and 1000 EC-B 125 Litronic tower cranes from Liebherr are designed for the installation of wind turbines and have to be guyed once to the tower of the wind turbine, the manufacturer says. The 1000 EC-B has a lifting capacity of 125 tonnes. Other features of the two models include the ability to work in high wind speeds. “Only when the wind reaches speeds in excess of 120 km/h does the jib of the 630 EC-H have to be released to turn freely,” the manufacturer explains. The models are also fitted with Liebherr Micromove system for positioning the tower elements.

Main concerns
Another concern for turbine installation is moving between turbines once on site. Klaus Kroeppel at Manitowoc says, “Cranes are often required to move around the job site to work on several turbines and, therefore, they must be easily transported in terms of weight, dimensions and number of loads. The space and speed needed to assemble and disassemble the crane on the jobsite is a major consideration that can save a great deal of time and money on a project. If the erection time of tower cranes can be reduced, they may become an alternative solution for remote jobsite locations, as well as for taller wind turbines.”

Guntram Jakobs at Terex, adds, “Erection sites are often characterised by unpaved surfaces and a lack of space. If the ground is not stable enough it must be paved in advance. Self-erecting capabilities of all Terex cranes are particularly useful when setting up a crane in constrained spaces as they make it possible to forego the use of an assist crane for a variety of assembly steps.”

Offshore solutions
In areas such as Japan where it is difficult to find adequate locations for wind turbine installation, the number of offshore wind farms is slowly growing. “Offshore wind power is highly useful as a source of generating energy,” a spokesperson from Uchimiya points out, “and with the expansion of marine contractor sector, we anticipate that the demand for floating cranes will increase in the future.”

Offshore installations, however, require more time and preparation compared to onshore sites, as Kroeppel explains, “There are considerations for different solutions for working on offshore projects including pre-assembling wind turbines before transporting them in one or two pieces to be installed at sea. Far bigger cranes onshore will be required to load the wind turbines onto barges because of the weights and radii of the lifts. Bigger cranes will also be required to lift the wind turbines from the barges onto their foundations at sea.”

A spokesperson from Liebherr-Werk Nenzing adds, “Wind turbine companies are looking for alternative ways to install wind turbines (other than cranes) because the turbines are getting bigger and are difficult to be installed offshore.”

Turbine projects
In Germany, a 1000 EC-B 125 Litronic was used to erect an Enercon E-101 wind turbine with a hub height of 135 metres in Wardenburg in the Rural District of Oldenburg, Germany.

The lifting capacity of the new crane is 125 tonnes in the six-line version or 100 tonnes in the four-line version. It can reach heights of 149 metres with a single guy on the tower of the wind turbine and can operate in free-standing mode up to a lifting height of 108 m, the manufacturer says.

Both the crane and the wind turbine can be erected on a comparatively small area. For ease of transport the jib parts can be transported inside the tower elements. It also has an adjustable undercarriage with a support base measuring 18 x 18 m, which was designed for the 1000 EC-B especially for Enercon. “The support struts can be adjusted on this special undercarriage from the 45 degrees position by 5 or 10 degrees,” a spokesperson from Liebherr-Werk Biberach explains. “The support base is then 20.4 x 15.2 m, allowing the crane to be moved closer to the object when there is little space available.”

Ludger Janssen, managing director of Energieanlagenmontage at Enercon, says, “We are very satisfied with the first job completed by the new crane. The 1000 EC-B 125 met all our expectations with its première. It means that we now have another piece of special equipment which will make it easier for us to erect wind turbines in constricted locations.”