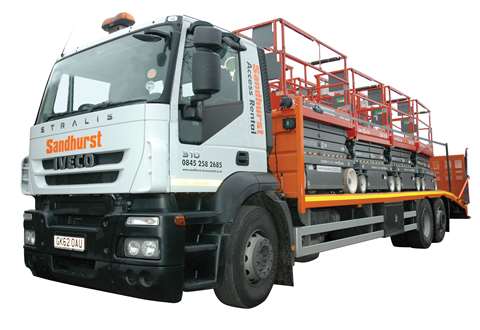 Sandhurst Access Rental was formed following a company-wide search for an additional specialist rental product that would complement its strategically placed rental centres. The company says it has already secured a team of experienced access industry professionals to coordinate the new division.

“Establishing the business around a pilot depot in the South East before roll-out proved a successful strategy,” said a company spokesman. “Systems and stock integration were naturally first priority, quickly followed by increased rental activity as news spread about Sandhurst’s new business."

Initially three company facilities are being equipped with powered access, including the key 60,000 square metre Rochester site, as well as Bristol and Birmingham, covering London and the South East, South West and the Midlands.

The company offers a full range of low level and powered access equipment under 20 m, as well as telescopic and articulated booms over 40 m. In the range are compact electric scissors, diesel scissors, rough terrain slab scissors and articulated booms, all of which are regularly used in demolition during building strip out.

In the future Sandhurst intends to roll out its Access Rental products to other rental centres covering the North West, North East and Scotland.