Visit bauma: IRN looks at new equipment at this year's Bauma for the rental sector 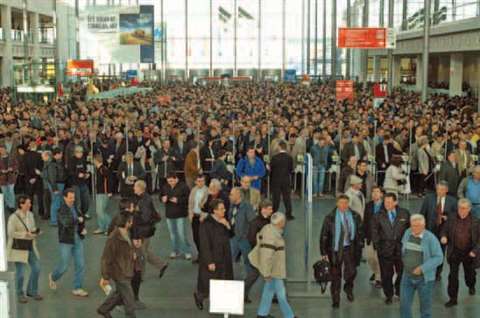 Over 400000 visitors will travel to Munich for the April Bauma show. It's the largest construction exhibition in the world.

Bauma gives rental company buyers an unrivalled opportunity to see, in one place, new equipment in virtually every product sector, from hand held tools to 40 t excavators, and more. This year will present some particular opportunities, including hundreds of new compact and mid-sized machines, as well as products from Indian and Chinese manufacturers who attend in far greater numbers than ever before.

This year's show will also be bigger and “better” than the previous one, says Bauma's organisers. The demand for space is “considerably higher” than Bauma 2004, with an extra 30000 m2 taking the total up to a leg-wearying 530000 m2.

This extra space will help accommodate exhibitors from the surging economies of China and India. The space allocated to Chinese manufacturers is five times greater than in 2004; that for India four times more; and Japan by five times. Bauma says exhibitors from Austria, Luxemburg, Turkey, Korea and Greece have doubled their demand.

This growth relates also to the generally buoyant construction equipment markets worldwide, and in particular to the importance of the European marketplace, especially at a time when the US market shows signs of cooling off.

Germany itself is a powerful attraction to equipment suppliers – three quarters of the over 410000 visitors in 2004 were from Germany, and the improved market conditions in Bauma's home country – GDP grew by over 2,5% in 2006 – will have provided an added incentive to many exhibitors.

The show is extremely significant for the rental industry, and more so this year because the European market is currently very busy. The show will be visited by rental companies who are actually looking to buy equipment. That wasn't the case three years ago.

The March issue of International Rental News will contain our comprehensive guide to much of the new equipment on show at Bauma. One key feature of the show, however, is new engine emissions laws that are expected to dictate many of 2007's introductions. The start of the year saw new Stage IIIA European exhaust emissions laws come in for off-highway machines using diesel engines in the 19 to 37 kW and 75 to 130 kW powerbands.

These ratings cover a huge range of equipment. The lower 19 to 37 kW band encompasses pretty much all compact equipment – mini excavators up to 5 t, most skid steer loader and compact wheeled loader models, and so on. This adds up to about 70000 units per year in Europe alone – more than 40% of the entire market in volume terms. The 75 to 130 kW powerband is also significant, covering what could be described as ‘mid-range’ equipment. Examples of machines affect include excavators from about 13 to 25 t, wheeled loaders in the 2 m3 to 3,5 m3 bucket classes, D5 and D6 class dozers, and compactors from about 8 to 15 t.

While sales of these are not as high in volume terms as the compact equipment used in small-scale and utility work, it is still a very significant group of machines. It covers many of the more popular classes of equipment used in road maintenance and new build, and other small and medium sized civil engineering projects. The 20 tonne class of crawler excavators for example is the most popular in Europe, and indeed the world.

Also look to Bauma for the latest in hybrid fuel and battery power technologies, with companies looking to respond to the challenges of global climate change.

Aerial platforms are also a popular sector for rental companies, and here, Bauma will deliver much, with new machines from Aichi, Hanix, Haulotte, Genie, JLG, UpRight and Snorkel, among many others. Haulotte is also planning to have the first prototypes of its own-manufactured telehandlers following the ending of its joint venture with Faresin.

Bauma is too good an opportunity to miss. To help you plan your visit, we include on these pages some useful information on travel, hotels and even visa requirements (if you need them). It's Bauma time.