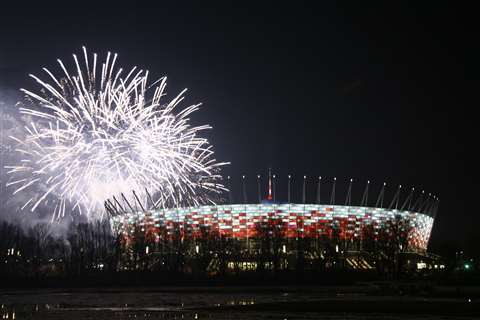 The Warsaw National Stadium was completed in January.

Construction of the Warsaw National Stadium, Poland's centrepiece for this year's European Football Championships, is complete.

The PLN1.5 billion (€355 million) project was built by a consortium consisting of Austrian contractor Alpine Bau and polish partners Hydrobudowa Polska and PBG. Work began in 2009, and the 58,000 capacity stadium is ready in time to host the kick-off match for the tournament at the start of June this year.

Designed by architects Konsorcjum JSK, the stadium has a 55,000m2 roof, including a 10,000m2 retractable section, and is divided into eight levels of various heights. The highest point of the steel roof construction is 70m above the current pitch.

The consortium also constructed two other stadiums for the 2012 European Football Championships. Posen Stadium, seating 43,000, was completed in the autumn of 2010, and the PGE Arena in Danzig, holding 44,000 spectators, hosted its first games in August 2011.