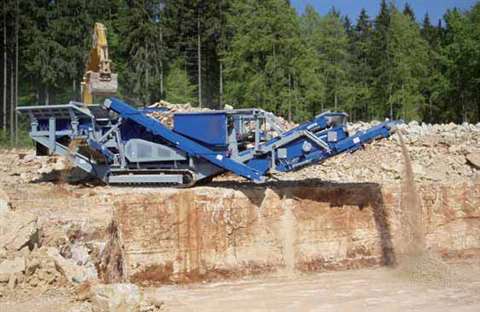 Along with a host of new machine launches at Bauma, perhaps the biggest news at the show, as far as the screening and crushing sector was concerned, was the surprise announcement that Sandvik was to acquire two mobile crusher and screen manufacturers – Extec and Fintec. These two acquisitions, subject to regulatory approval, will propel the company straight into the top three mobile crusher/screen manufacturers.

According to Sandvik president Lars Josefsson, “We have an ambition to be number one in the areas in which we operate. We have been active in mobile crushers since 2001 with the acquisition of Svedala, but as a minor player.

“We could have expanded organically, but we had the joint ownership of Fintec and had the opportunity to acquire other companies. We will extend our offering with the Fintec and Extec acquisitions. We see this market as being substantial and worth going after.”

The news followed the announcement last September that road building equipment manufacturer Wirtgen Group had acquired an 80% share in fellow German company Kleemann, which manufactures mobile and stationary crushing and screening equipment, for an undisclosed sum.

Wirtgen said it planned to build a new factory near Kleemann's existing facility in Göppingen, Germany to boost production and increase efficiency. At the time of going to press a company spokesman said the location of the new factory had yet to be decided, although it hoped to make an announcement soon.

Wirtgen has also outlined plans to distribute Kleemann products through its wholly-owned sales subsidiaries in the CIS (Commonwealth of Independent States) and parts of Eastern Europe, which it says should also increase sales of Kleemann products.

As news of its acquisition by Sandvik broke at Bauma, UK-based Extec also announced it had been awarded the Queens Awards for Enterprise in the International Trade category for the second time in three years. The award is in recognition of the company's outstanding success in developing overseas markets and exporting its machines for the recycling and quarrying industries, according to operations director Ian English.

“The Award is given to companies that have shown a substantial and sustained increase in export earnings to an outstanding level,” said Mr English.

This sustained growth in export orders is a result of, “the sustained development of our global distribution network where we carefully select our partners to ensure we share a common vision of complete customer care,” he added.

Another company to have won an award recently is Austria's Rubble Master. Following awards for its RM70 and RM80 Compact Recyclers in 2007 it recently won the prestigious red dot award for its RM100.

The red dot is awarded annually in recognition of outstanding product design, communication design and design quality, with the jury basing its decision on criteria such as innovation, functionality, formal quality, ergonomics, the instant recognition of a product and its ecological compatibility.

With the opening up of Eastern Europe following the expansion of the EU in May 2004 many manufacturers are now looking to increase their exports to the region. Wolfgang Kormann, CEO at Rockster told CE the company is keen to expand its operations in the east of Europe, where it currently manufacturers its machines. Although Mr Kormann said it is looking to achieve a market share of 30% in the smaller, mobile crusher market in Western Europe before any concerted efforts to expand east.

Micheal Fasching, marketing manager at MFL echoed Mr Kormann's sentiments. He told CE that demand in Russia and Eastern Europe has been “huge” in the last 12 months, while Turkey is also becoming an important market.

“In the last six months we've seen demand for our products in Turkey and Saudi Arabia growing tremendously. Turkey is certainly a strong market. We have a new sales agent in the country and we see this as a gateway to the wider Middle East region. Iran is going to be an important market in the future, and we see a lot of potential there too,” said Mr Fasching.

Rubble Master's managing director, Gerald Hanish, told CE the company has increased its sales by over +40% in the last 12 months across all territories, with the US, Australia and Eastern Europe all showing particular growth.

“We've grown our dealer network in the last 12 months, which has resulted in the sale of about 120 crushers and about 100 screens,” said Mr Hanish. “Demand for infrastructure in Eastern Europe means contractors are looking to expand their operations with the result that we've seen demand for bigger machines that are mobile and highly productive.

“Companies [in the region] have been holding back on investment but now things are going crazy, particularly in the Baltic States and Russia. While the Baltic States may be small countries we have seen a lot of activity there in the last 12 months with sales of 30 crushers and 30 screens,” said Mr Hanish.

Micheal Wolf, head of Rubble Master's Russian operations told CE the growth of recycling in Western Europe is beginning to have a knock on effect in Eastern Europe too.

“Contractors in Western Europe are becoming more aware of the value of small jobsites, where a contractor may be recycling a house or small office block in an urban environment, and I can see this transferring across to Eastern Europe too,” said Mr Wolf.

Demand in Eastern Europe, said Mr Hanish, is for virgin aggregates for railways and recycled aggregates for use in road construction and house building. “Customers are looking to buy packages – crushers and screens – so we take their hand. There are plenty of new players, such as brick manufacturers and pottery makers who can see extra revenue streams, particularly when using smaller mobile machines, so we make our R&D available to help them set up and sell our business model.

Many of the manufacturers CE spoke to at Bauma cited mobility, flexibility, longer service intervals and easier maintenance as the key requirements of customers from their dealers. “It's getting harder to find the ‘right' kind of person to operate and maintain a machine, so future designs need to be a simple as possible,” said Rockster's Mr Kormann.

Many companies are now introducing training programs for their dealers, which will help spread “best practice”. Terex Pegson, for example, is now offering a range of training programs designed to deliver “added value to the dealer operation”.

According to Terex Pegson's training manager James Higgins and training consultant Simon Unwin, this involves bringing dealership engineers up to OEM standards where they can commission, set up and decommission the company's machines.

Together they have devised the Terex Pegson Training Academy, based at the company's headquarters in Leicester, UK. According to Mr Higgins, many years of equipment knowledge and training experience gathered from Pegson's full-time trainers, engineering experts and TSG (Terex Support Group) field service personnel has gone into the training material.

“Dealer engineers receive 17 years' experience in one week. The dealer engineer, under the guidance of a Terex Pegson TSG engineer, commissions every new product sold into a dealership. This ensures the plant is set-up correctly and will deliver finished product to the customers' requirements. Following training, dealer engineers can confidently diagnose and resolve machine problems in the field,” said Mr Higgins.

“We deliver a lot of training by presentation, incorporating structured hands on opportunities where appropriate. We induce faults on plants during training sessions and organise delegates together in a maximum group size of four encouraging them to ‘fault find' as a team,” said Mr Higgins.

The training is designed to emphasise student interaction and co-operative learning structures. Courses can run from one to seven days depending on the number of topics covered. Electrical, hydraulic, engine and general engineering modules are offered by the training team, geared toward individual dealer requirements.

“Our instructors encourage open discussion, so all participants can benefit from each other's experiences. The students take an active role in training activities, participating in interactive sessions, which facilitate learning, promote retention, and provide valuable, applicable skills.

“We complete checklists on the machines so engineers know how each machine actually functions, ultimately learning the logic of the machine to become more effective in the field,” added Mr Higgins.

Mr Higgins told CE the training material content is up-to-date, detailed and accurate, drawing on almost 20 years of modification and refining of training processes. Dealer engineers, said Mr Higgins, leave the training events with a high level of mechanical competency, a detailed machine-specific training record and the confidence that only comes with customised OEM training.

The future of Terex Pegson's training program will involve establishing a fully-fledged Training Academy in Leicester, as well as training engineers in new dealerships opening across the globe. The training team already covers over 100 dealers worldwide, including a dedicated training team for dealers based in the US.

MFL's Mr Fashing told CE he expects automation and after sales support to play an ever greater role in the coming years, with customers demanding parts as “quickly as possible”, which means holding a certain number of key components in stock and having the ability to get them to the customer as quickly as possible. Customers also want “as little service and maintenance as possible”, said Mr Fashing.

It also looks certain that small mobile crushers will play an ever more important part in Western Europe as recycling becomes an increasingly important issue too. Mr Kormann expects future demand in the sub 25 tonne sector, traditionally the area in which smaller, recycling contractors work, will be “huge”, particularly in the emerging markets of Eastern and Central Europe.

However, he sounds a word of warning, “It is important to get the technology right. Our R900 came about through customer requests for just that type of machine, so responding to customer demands is a key driver of any successful innovation.”