The cranes, rented from Cranetal Noda Co., are built to withstand earthquakes scoring level nine on the Mercalli intensity scale and hurricanes of up to 200 km/h. A 2019 article in Hong Kong-based newspaper The South China Morning Post, said the last large earthquake to hit Tokyo was in 1923 and experts estimate the next one is due roughly a century on, with an estimated 70 per cent chance of a magnitude-7 quake hitting Tokyo before 2050. It was no longer a question of if – but when – the big one will come, the paper predicted.

The five fast-erectors were being used to construct the bridge piers and girders of a new motorway linking the city of Toyoda with Japan’s capital Tokyo. The jib length of the cranes is variable between 25.5 to 36 metres, and the tower height from 12 to 26 metres; Liebherr reported that Sumitomo Mitsui Construction Co. found this flexibility of benefit. 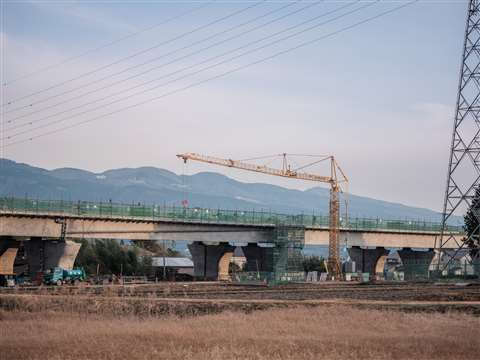 The tower height of the Liebherr 42 K.1/J goes down to 12 metres; this enabled the cranes to pass under a power line crossing the site