They are being used to help with the construction of a new Amazon headquarters which will be dedicated to e-commerce, cloud and artificial intelligence technologies. Construction is scheduled for completion in 2022.

The two tower cranes have been fitted with two DCS 60 anti-collision systems from by French zoning and collision-avoidance equipment manufacturer AMCS Technologies. According to AMCS Technologies, the systems will manage prohibited overflight zones and avoid any interference between the two cranes. The DCS 60 operates in real time and in three dimensions to calculate the distances between each crane component as well as movement speed, AMCS Technologies explained. The system applies a security envelope around the jib in proportion to the speed of slewing of the crane as well as around the cable in proportion to the speed of movement of the trolley. This is particularly important on the Amazon construction site where the two tower cranes have been located in close proximity and facing each other.

Videos and photos of the tower cranes being erected can be seen on Jaso’s Instagram page www.instagram.com/jasotowercranes 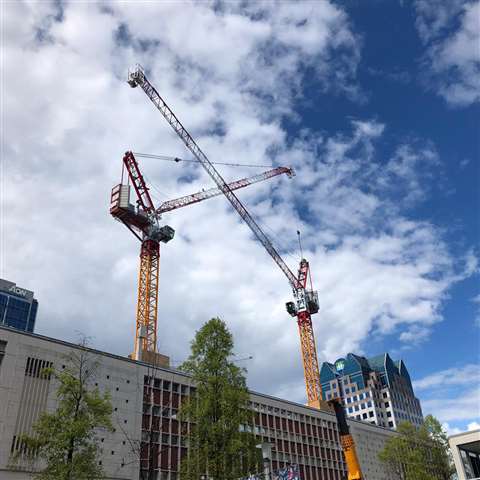 The two Jaso J380PA luffing jib tower cranes have been erected facing each other on the roof of the new Amazon headquarters construction site in Vancouver, Canada. To enhance safety, they have both been fitted with DSC 60 anti-collision systems from AMCS Technologies