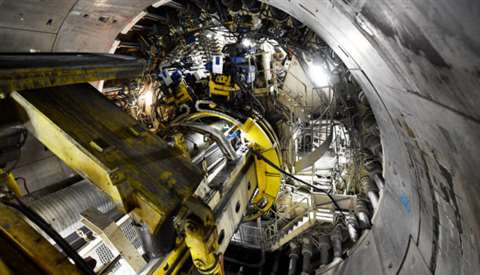 Tunnelling work is underway on elements of the TELT project

Engineering firm Aecom has been awarded a contract to support the design and construction of the Lyon-Turin high-speed railway tunnel project.

At the heart of the project is the 57.5km twin-bored base tunnel – the longest rail tunnel ever built – which will cut through the Alps between France and Italy, connecting the high-speed rail networks of the respective countries.

The controversial project, partly funded by the European Union (EU), has been a hot political topic in Italy since it was initially proposed some 30 years ago, with the current coalition divided over both costs and environmental concerns.

Following the EU’s offer to increase its share of funding from 40% to 55%, however, Italy’s Prime Minister, Giuseppe Conte, said the work necessary to block the project would now cost more than its completion.

He said the project was “an example of a successful long-term collaboration between Southern Hub countries – Spain, France and Italy, and the global support of the AECOM experts”.

He added, “Providing safe, fast transport that reduces pollution and protects the environment, this railway will transform the way people and goods travel between France and Italy, building a legacy for generations to come”.