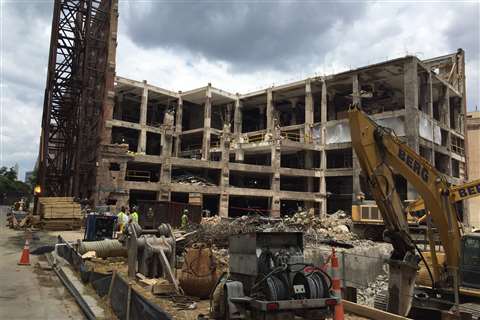 Project – The Museum of the Bible

The Bible Museum was an intensive and massive structural and selective demolition of an aging building surrounded by active pedestrian, vehicular, subterranean and railway traffic in the heart of one of the most congested, scrutinised and important cities in the United States. The environment surrounding the project was not only politically charged but physically daunting.

As part of London’s Crossrail project, the site of Hanover Square in the West End is being transformed to create the new Crossrail Eastern Ticket Hall Station, along with an accompanying £500 million (US$645 million) development of retail, office and residential space.

Last year saw Erith demolish 12 properties to make way for this new development, while retaining eight of the historical façades, one of which is Grade II listed.

The project involved the deconstruction of the 87 m (285 ft) high landmark Sydney Harbour Control Tower. The tower consisted of a reinforced concrete column topped by a stainless steel and glass operations area.

Liberty Industrial was appointed to remove the tower following the proposal of an innovative and carefully considered deconstruction methodology designed to minimise the impact on local residents, businesses and visitors to the parkland where the tower is situated.

Walsingham House was a particularly challenging project for O’Keefe for various reasons – it was a tight urban site adjoined to a hotel, no tower crane could be used, and there were archaeological investigations going on at the time.

To facilitate the development, O’Keefe had to demolish the internal structure of the building and retain the external Portland stone façade. To make the situation even more complex, the site adjoins a hotel with narrow streets which are constantly busy with people.

Rye Demolition was awarded the contract to demolish the iconic West Ham United football stadium (the Boleyn) in the borough of Newham in East London at the value of £2 million (US$2.6 million). The stadium was in a built up heavily residential area surrounded by tower blocks, private housing, artierial roads, shops, a school and a church.

How to improve sustainable practices in rental
Appleton Column: When it comes to sustainability in the equipment rental sector, Kevin Appleton says businesses should stop the virtue-signalling and look for meaningful actions