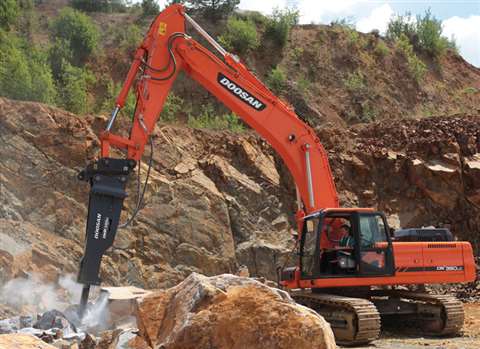 Measures are constantly being taken to improve the way that a breaker does its job, as well as making it a safer and more comfortable process for the operator.

Also, the company said it reduced energy consumption by 50%. This means that a compressor only half the size is needed, or that two breakers can be used on a compressor which previously powered only one breaker.

The result, said the company, was a smaller investment in the compressor, lower fuel consumption, easier transportation, and reduced emissions.

Atlas Copco said it was delivering increased profitability through a new advanced technology in breaking efficiency and ergonomics. A new operating principle – Constant Pressure Control, which features improved energy transfer within the breaker and the new RHEX Power Chisel – was said to mean that the RTEX achieved record high breaking efficiency.

It said the RTEX had the breaking capacity of a breaker of more than 30kg, using only half as much compressed air, and that being 25% lighter meant that the operator had 5 to 10kg less to handle.

The company said that measured according to EN ISO 28927-10, the 3-axes hand-and-arm vibration was below 5m/s2. Under these conditions an operator can work up to eight times longer than with conventional breakers, according to the safety guidelines, it said.

The reason is the Constant Pressure Chamber on the top of the breaker, which serves as advanced pneumatic suspension, said Atlas Copco.

As it is more compact than a traditional breaker, this was said to make it easier to work with in tight areas, and to provide a more ergonomic working position. Stiff handles and the Sofstart function were said to make it easy to control the power of the RTEX.

The 50% reduction in compressed air consumption has been made possible thanks to a new working principle invented by Atlas Copco engineers Olof Östensson and Thomas Lilja from the Construction Tools Innovation Centre in Kalmar, Sweden.

Olof Östensson said, “In a conventional breaker, air is discharged each time the acting piston moves up or down. In the RTEX, we discharge the air only once – on the piston’s return stroke. Then the constant pressure from a chamber on the top of the RTEX pushes the piston down.

“The pressure on top of the acting piston is constant and therefore does not generate vibrations as on conventional breakers, so there is no need for vibration damping.”

He said that to achieve this, the valve was moved from the top of the breaker to the bottom, and the new, longer and heavier piston transferred power more efficiently to the RHEX Power Chisel.

On a completely different scale, visitors to the Hillhead show in the UK last June were able to take a look at Atlas Copco’s HB10000 10 tonne hydraulic breaker.

One of the HB10000 breakers has been in use in Queensland, Australia, by specialist basement and civil excavation company Earthmoving Contractors (EMC) – the first company in Australia to use a breaker of this size for inner city bulk excavation work.

Jim Dupuis, managing director and owner of EMC, said, “The HB 10000 is breaking out more than double compared to our existing 7 tonne breaker HB 7000.”

He also said how surprised he was at the low noise levels and how comfortable it was to operate for such a large and powerful breaker.

The UK’s Hillhead show saw the international launch of a new line of attachments and demolition tools from Sandvik’s hydraulic hammer brand Rammer. The attachments include cutter-crushers, scrap shears and pulverisers.

Earlier in the year, it introduced two new PRO hammers – the Rammer 2577 PRO and Rammer 5011 PRO.

The 2577 PRO is suitable for carriers in the 21 to 32 tonne class and the 5011 PRO for 43 to 80 tonne weight range, and they claim a number of key additions that the company said took the PRO range to the extreme.

The 1,940kg Rammer 2577 PRO and the 5,300kg Rammer 5011 PRO are based on the Rammer 2577 and 5011 hammers. The new models are said to share many key features that have established these units as some of the most popular hammers in the world.

Both new models possess features such as an idle blow protector that works regardless of working mode to provide greater levels of protection. Additionally they are equipped with long-life, high-tension VIDAT (vibration dampened) tie rods which Rammer said was for improved reliability, extended service periods and lower operating costs.

Caterpillar’s new H80E/Es hydraulic hammer, designed for the full range of Cat backhoe loaders and for 307 and 308 excavators, is available in both conventional (H80E) and silenced (H80Es) versions.

Replacing the H75E/Es model, the H80E/Es is completely designed and manufactured by Caterpillar, and fully supported by Cat dealers. It delivers 1,356J of energy at 600 to 1,500 blows per minute.

The H80E/Es has a lighter operating weight compared with the previous model, which Cat said resulted in greater working stability and increased carrier fuel economy. In addition, the new hammer accepts a wider range of hydraulic-oil flow, allowing the H80E/Es to be used with a variety of carrier brands for optimum utilization in mixed fleets.

The E-Series hammers range builds on the D-Series features, including an automatic shut-off system that instantly stops hammer operation when the tool breaks through material. The system is said to increase hammer reliability and durability by eliminating high internal stresses created by blank firing. Sound suppression is a standard feature for the H80Es.

The H80E/Es hammer uses a gas-fired system that claims to maintain constant power between service intervals. The E-Series housing, built for strength, has a curved profile, front and back, that eliminates stress points and transfers forces to the bottom of the hammer. The hammer is also sized and shaped to curl under a backhoe loader boom for easy transport without boom damage or interference with traffic.

Volvo has a range of low noise breakers for different models of compact, crawler and wheeled excavators. For example, for machines of the 10 tonne class or smaller, there is the HB02, HB03, HB06 and HB08.

Volvo said five of these models were also designed for wheeled excavators. An HB22 hydraulic rock breaker, which works with the EC210B crawler excavators, is currently being used on a road project in India on an 84km stretch of road from Bankura to Purulia, where the two-lane road is being expanded from 5.5m wide to 10m. The HB22 is said to be providing consistent power, durability and breaking force.

Volvo said that at the heart of an HB breaker was a heavy, long stroke piston. This, it said, ensured 100% of hydraulic power was converted into striking force.

Low and high pressure accumulators control the piston so its recoil energy on the HB200, HB300, HB440 and HB450 is absorbed and recycled to increase force on the power stroke. This is said to lead to more power and performance with less noise and vibration.

It added that the impact rate could be controlled to match the application, while it said the breakers were reliable and simple to maintain

It added that a patented main valve controlled the piston movement to optimise the striking power.

The number of wear parts such as the piston and cylinder has been minimised to reduce replacement and maintenance cost.

A hydraulic cushion at the bottom of the cylinder bore slows and stops the downward movement of the piston. The dampening system protects against blank firing from the first blow, said Doosan.

The new 16.5 tonne DX165W-5 Stage IV compliant wheeled excavator from Doosan, has a feature which is standard on all dash-5 machines and is said to increase operator comfort when controlling attachments such as breakers from the joystick for long periods or very repetitively.

It is also said to be helpful when precision is required, as the operator can keep full control of the excavator via the joystick while using the two-way pedal for attachments.

Doosan owns Bobcat, which also offers a range of breakers, all of which are silenced as standard. They claim to be the hardest-hitting breakers in their classes. Diaphragm-type accumulators are said to reduce maintenance by preventing slow leaks, while its new, longer-life breakers are designed for demolition contractors.

Korean manufacturer of hydraulic attachments for demolition and recycling Daemo showed 16 products on its stand at this year’s Bauma fair in Germany, including the new Alicon B06.

With an operating weight of 68kg, this hydraulic breaker is suitable for excavators between 0.8 and 1.2 tonne and specialises in super-light demolition usage.

The company’s Alicon B360 was also seen at the Hillhead show, attached to a Hyundai HX430 L excavator.

As a result the breakers have few moving parts and the construction is designed for easy and simple maintenance and repair.

The breakers are described as “longer life” thanks to a special hardening process, and having higher impact energy through long and short stroke.