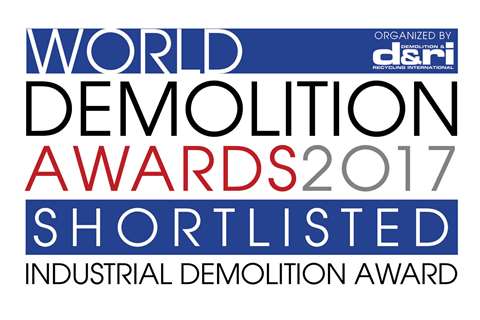 Due to technological innovation, the two 72 m (236 ft) high hyperboloid cooling towers became redundant and needed to be removed. The cooling towers were constructed from external steel skeleton structures with asbestos cement sheeting on the inside. Since the 1950s the towers had been completely surrounded on all sides.

Client – Government of Newfoundland and Labrador

Delsan-AIM entered into a contract with the government of Newfoundland and Labrador (NL) to undertake the decommissioning and demolition of a former paper mill Grand Falls – Windsor, NL. A hydroelectric generating facility, that was part of the mill operations, remained in-service during the course of the project. All work was performed safely, with no health and safety issues and in collaboration with the client, the hydroelectric generating station and the community.

This project saw Erith demolish a bulk pharmaceutical manufacturing plant for its client, BMS, to pave the way for one of the largest construction projects in Ireland – the construction of a state-of-the-art facility for manufacturing two brand new and ground-breaking drugs to treat cancer.

The project brought with it the challenge of safely disposing of around 650 t of hazardous chemical and pharmaceutical waste.

This project was technically complicated due to site-specific hazards, site density and the need to ensure the facility’s continuous operation.

Ambient temperatures varied from -28°C to 11.3°C. For 70% of the project time, temperatures dropped to zero necessitating the adaptation of equipment and infrastructure to extreme weather conditions. Other issues were underground cavities, tunnels and utilities in the main building, and densely built-up areas and ongoing operations at the site making it difficult to carry out explosion-assisted demolition (primarily stacks). 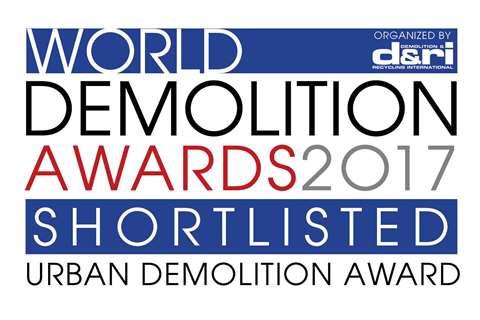 Project – The Museum of the Bible

The Bible Museum was an intensive and massive structural and selective demolition of an aging building surrounded by active pedestrian, vehicular, subterranean and railway traffic in the heart of one of the most congested, scrutinised and important cities in the United States. The environment surrounding the project was not only politically charged but physically daunting.

As part of London’s Crossrail project, the site of Hanover Square in the West End is being transformed to create the new Crossrail Eastern Ticket Hall Station, along with an accompanying £500 million (US$645 million) development of retail, office and residential space.

Last year saw Erith demolish 12 properties to make way for this new development, while retaining eight of the historical façades, one of which is Grade II listed.

The project involved the deconstruction of the 87 m (285 ft) high landmark Sydney Harbour Control Tower. The tower consisted of a reinforced concrete column topped by a stainless steel and glass operations area.

Liberty Industrial was appointed to remove the tower following the proposal of an innovative and carefully considered deconstruction methodology designed to minimise the impact on local residents, businesses and visitors to the parkland where the tower is situated.

Walsingham House was a particularly challenging project for O’Keefe for various reasons – it was a tight urban site adjoined to a hotel, no tower crane could be used, and there were archaeological investigations going on at the time.

To facilitate the development, O’Keefe had to demolish the internal structure of the building and retain the external Portland stone façade. To make the situation even more complex, the site adjoins a hotel with narrow streets which are constantly busy with people.

Rye Demolition was awarded the contract to demolish the iconic West Ham United football stadium (the Boleyn) in the borough of Newham in East London at the value of £2 million (US$2.6 million). The stadium was in a built up heavily residential area surrounded by tower blocks, private housing, artierial roads, shops, a school and a church.